Did TikTok Users Just Troll the Trump Rally In Tulsa? 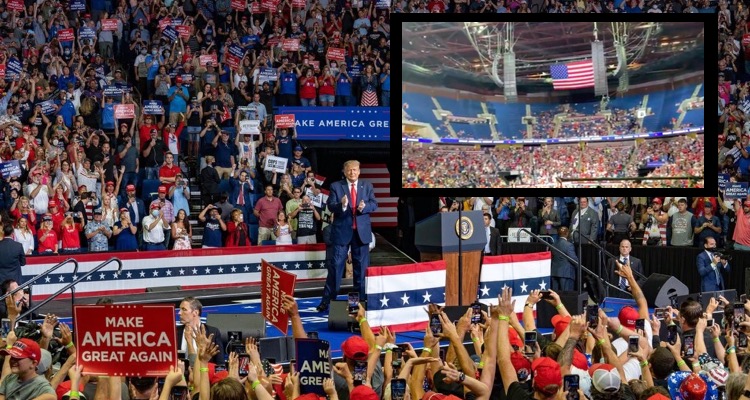 The upper decks were mostly empty during Donald Trump’s Tulsa rally on Saturday, with thousands of empty seats.

The heavily-hyped Trump rally struggled to fill large portions of Tulsa’s BOK Center on Saturday night. But were trolling TikTok users to blame?

Last week, we reported on a massive effort by TikTok users to troll the Trump rally on Saturday night.  Now, it looks like they may have actually succeeded.

The trolling effort was simple. TikTok users merely flooded the official Trump rally page with fake ticket requests to block out legitimate requests from actual Trump supporters. The Trump campaign immediately denied that the prank was having any impact, though a surprisingly small crowd of 6,200 at the Saturday rally has raised some serious questions. The total capacity of Tulsa’s BOK Center, where the Trump rally was held, is approximately 19,000.

So what really happened?

The Trump campaign immediately pointed to problems with outside protestors, who apparently blocked admission for Trump supporters trying to get inside. Separately, protesters themselves may have been seeking entrance into the Arena to heckle Donald Trump, a situation that may have pushed out actual supporters while introducing a number of security issues.

“Sadly, protesters interfered with supporters, even blocking access to the metal detectors, which prevented people from entering the rally,” Trump campaign communications director Tim Murtaugh stated. “Radical protesters, coupled with a relentless onslaught from the media, attempted to frighten off the president’s supporters. We are proud of the thousands who stuck it out.”

The question is whether blocking protesters, the general threat of violence, and fears of attending a COVID-19 ‘super spreader’ event, may have explained the underwhelming audience.  But TikTok users — and their supporters — were already taking a victory lap on Sunday.

“Actually you just got ROCKED by teens on TikTok who flooded the Trump campaign with fake ticket reservations and tricked you into believing a million people wanted your white supremacist open mic enough to pack an arena during COVID,” tweeted New York Democrat Alexandria Ocasio-Cortez.

“Shout out to Zoomers. Y’all make me so proud.”

The trolling may have been happening on Alt TikTok, with a little help from K-pop fans.  “It spread mostly through Alt TikTok — we kept it on the quiet side where people do pranks and a lot of activism,” YouTuber Elijah Daniel told the New York Times. “K-pop Twitter and Alt TikTok have a good alliance where they spread information amongst each other very quickly. They all know the algorithms and how they can boost videos to get where they want.”