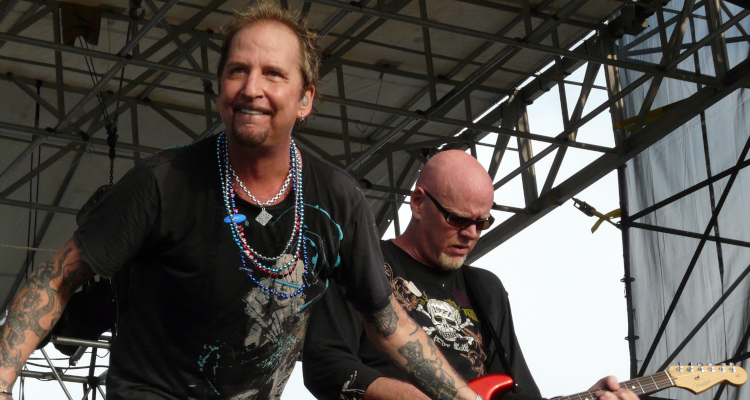 As with country music artists Chris Janson and Chase Rice, whose non-socially distanced gigs were dubbed “super spreaders” by critics last month, it appears that outrage over Great White’s set erupted after footage was posted to social media. To be sure, First by First promoted the happening – which featured Anthem as an opener and Great White as a headliner – via a series of (largely) controversy-free Facebook posts beforehand.

The initial wave of pushback seems to have arrived once First by First posted a short clip of the concert. 18 seconds in length, the video shows a largely maskless – albeit relatively distanced – crowd enjoying a cover of Foreigner’s “Feels Like the First Time” from Anthem. Some user comments questioned whether the gig would jeopardize the safety and wellbeing of attendees.

Additional footage indicates that by nightfall, however, the (possibly larger) audience had moved together to enjoy Great White’s headlining effort. While it’s difficult to discern details in the poorly lit clips of the set, the crowd is clearly grouped together, and most fans appear to have opted not to dawn masks. To date, medical professionals have diagnosed 4,338 North Dakotans with COVID-19, and 91 residents have perished as a result of the disease’s complications.

Many social media users are voicing their opinions on the matter, with the overwhelming majority of the responses being critical. Moreover, a sizable portion of the messages connected the band’s performance at First at First to a tragic fire that erupted during a 2003 nightclub concert in Rhode Island. Having resulted from a pyrotechnical mishap, the blaze claimed 100 lives (including that of Great White guitarist Ty Longley) and injured hundreds of others.

“First they burn a club down and kill a bunch of people, and now they’re helping spread a virus to kill a whole lot more.  First was a reckless accident, while this is just dangerously irresponsible,” lambasted one social media user.

“I know everyone wants to get back at it, but the numbers are too high and still rising. So not a smart idea,” tweeted another person.

In the leadup to Great White’s First on First appearance, organizers emphasized that they would proceed with the planned events despite the anticipated controversy; other artists are scheduled to perform each Thursday until August 13th.

Great White has addressed the pushback in a statement:

“We understand that there are some people who are upset that we performed this show, during this trying time. We assure you that we worked with the promoter. North Dakota’s government recommends masks be worn, however, we are not in a position to enforce the laws. We have had the luxury of hindsight and we would like to apologize to those who disagree with our decision to fulfill our contractual agreement. The promoter and staff were nothing but professional and assured us of the safety precautions. Our intent was simply to perform our gig, outside, in a welcoming, small town. We value the health and safety of each and every one of our fans, as well as our American and global community. We are far from perfect.”