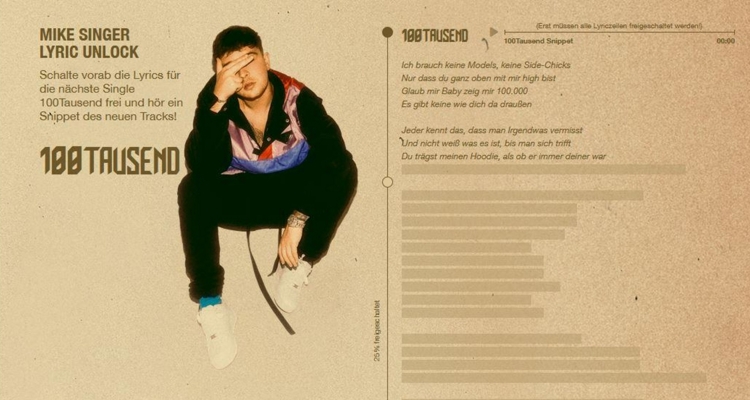 The initiative is designed to push his new single, “100Tausend” (100 Thousand), which is slated for release on July 17th. Users who visit the singer’s website can pick their favorite streaming service. From there, they are asked to play a previous single and pre-save or pre-add the album.

The move will help Mike Singer game music streaming service’s algorithms and push his music to a broader audience. All it takes is a few hundred dedicated fans to participate and drive the song to the top of the charts. As a carrot for supporters, when the campaign reaches 100%, a full snippet of the song will be released. Lyrics are fed in a slow drip as the campaign progresses, encouraging more fans to participate.

The campaign works in Mike Singer’s benefit for two singles, driving interest in both while also boosting album sales. Warner Music hopes the pre-adds will also keep Singer’s music in fans’ playlists for future releases. It’s a clever strategy that games algorithms to create artificial interest. It’s arguably manipulation of the algorithms, but at least it’s not fraudulent.

Some artists have taken to spoofing featured metadata to increase the presence of their music on streaming platforms. The ‘black hat’ tactic seems to have worked in the past.

This bait-and-switch campaign sees the aspiring streaming artist upload a song using a third-party service. When filling out track information, the artist adds a famous star as ‘featured,’ even if they have no involvement. If the fabricated metadata sneaks past Spotify’s safeguards and the ‘featured’ artist’s team, Spotify’s algorithm gives the track a prime spot in front of fans of the spoofed artist.

Spotify requires artists to use a digital distributor to help prevent this kind of fraud. It has a preferred list of distribution companies that “meet our standards for providing quality metadata and protecting against infringement.” The caveat is that musicians aren’t required to use a preferred distributor, and it’s easy to find one that doesn’t check metadata as thoroughly as they should.

He’s managed to spoof thousands of artists on Spotify, racking up millions of monetizable streams with fake metadata. His most successful stream scam ‘featured’ the rapper Tay-K after his viral hit, “The Race,” exploded in 2017. Wali Da Great released at least eight different faked Tay-K projects on Spotify. Fakes still show up atop the embroiled rapper’s profile, even though the rapper hasn’t released anything recently.