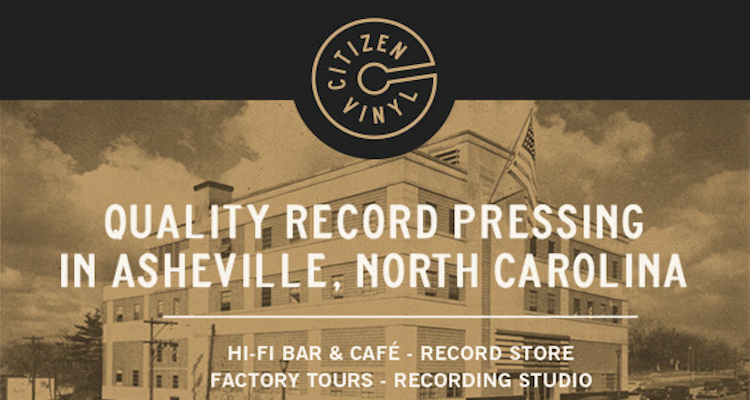 In February, Digital Music News was first to report that a fire had destroyed Banning, California’s Apollo Transco, one of two plants in the world (the other being Japan’s MDC) known to create the lacquer discs used to form vinyl master discs. Now, in the wake of this unfortunate setback, a new vinyl record pressing facility is preparing to open.

Called Citizen Vinyl, the Asheville, North Carolina, business will begin welcoming a limited number of fans in mid-September. In addition to being the first record-pressing factory in “The Tar Heel State,” the vinyl establishment – situated within the roughly 10,000-square-foot former offices of the Citizen-Times newspaper – will encompass a record store, a recording studio, and even a bar/café.

Founded by music producer Gar Ragland, Citizen Vinyl aims “to embrace a role as a community hub and center for creative collaboration,” according to the formal announcement of its debut. The aforementioned bar and café combination, Sessions, will offer coffee and casual meals during the daytime, as well as cocktails and “more sophisticated” dishes during the dinner hours – with vinyl records playing all the while (needless to say).

Furthermore, Citizen Vinyl “aspires to revive some of the hope, camaraderie, and excitement surrounding independent arts that may have been muted in the wake of the pandemic.” In this vein, fans will have the opportunity to witness the vinyl-pressing process firsthand, via employee-led tours. That mirrors the approach of Third Man Records in Detroit, where enthusiasts often travel thousands of miles for a factory tour and hang-out experience.

Addressing Citizen Vinyl’s opening in a statement, CEO Gar Ragland said: “It’s a once-in-a-lifetime opportunity to bring this historic studio back to life, and to be able to work in a space with such deep history. … We hope that this space can provide a fun and restorative experience for both our community and its many visitors, and that the power of music, food and beverage will help grant some relief in these stressful times.”

That investors were willing to front the capital for Citizen Vinyl is indicative of vinyl’s ever-growing appeal and popularity, especially in the U.S. About ten days ago, we reported that vinyl had thrived through this year’s first half despite the COVID-19 pandemic, including both its lockdown measures and economic impact. As of July 2nd, total vinyl sales had hiked by more than 11 percent, from 2019’s initial six months, expanding upon 14 consecutive years of growth.