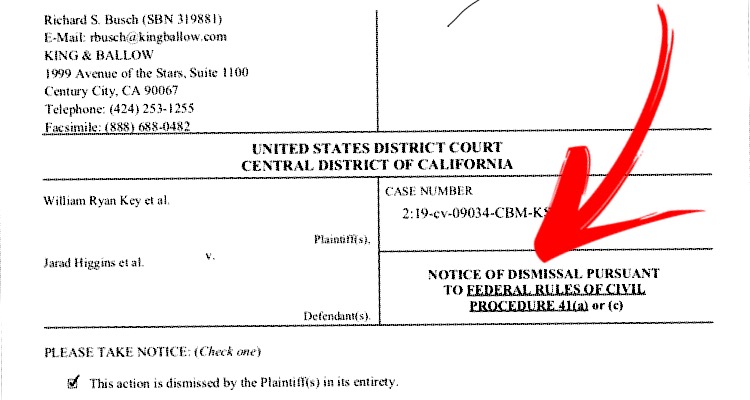 After months of aggressive litigation — and the death of Juice WRLD himself — emo-punk bank Yellowcard have decided to drop their $15 million copyright infringement lawsuit against the rapper’s estate.

The decision to dismiss follows months of aggressive litigation that dragged a number of defendants into the courtroom. That includes Juice WRLD’s mother, who was left to defend against the aggressive, $15 million copyright lawsuit following the death of her son late last year.  News of the dismissal first surfaced this morning, with court paperwork from the U.S. District Court for the Central District of California shared with Digital Music News.

The litigant, early-2000s emo-punk band Yellowcard, decided to simply drop the suit given the optics of suing a grieving mother. “My clients really were uncomfortable about pursuing this action against Juice WRLD’s grieving mother as the representative of his Estate,” Yellowcard attorney Richard Busch told Digital Music News.

“As they said previously, they also are incredibly sympathetic about his death, and were torn initially  about  pursuing this in light of his death.  As a result of all that has happened, they simply need additional time to decide what they want to do.”

Busch noted that the case was voluntarily dismissed with prejudice, which means it can be reignited at any point.  But for now, it’s caput.

Though Busch didn’t elaborate further, the recent surge of racial protests across the U.S. may have also motivated the dismissal. The lawsuit’s optics were never good, though it’s possible that the punk group experienced an abrupt change of heart.

The similarities between the songs are clearly present, though it was speculative whether Juice WRLD (whose real name is Jarad Higgins) actually poached the track.  For starters, the rapper was barely 20 when he passed away, and released “Lucid Dreams” when he was 18.

Perhaps most importantly, Higgins was merely six years old when “Holly Wood Died” came out. And it’s possible he’d never heard of the band, much less the song. But Juice WRLD’s untimely death from an overdose of pills further complicated the litigation, for multiple reasons.

For starters, Higgins himself could obviously never take the stand. And with the star defendant dead, that left Juice WRLD’s mother to deal with the legal mess.

The album, Legends Never Die (Grade A Productions/Interscope Records), features nearly twenty tracks from the Juice WRLD vault.  Trippie Redd, Halsey, Marshmello, and Polo G are just some of the guests on the album, which quickly soared to the top of Billboard’s album ranking.  That was hardly a surprise given Juice WRLD’s fervent fanbase, though it also brought the copyright lawsuit back into the spotlight.

The Yellowcard litigants — William Ryan Key, Peter Michael Mosely, Longineu Warren Parsons, and Sean Michael Wellman-Mackin — were initially unwilling to drop the case.  But there were substantial delays caused by both Higgin’s death in December and the onset of the COVID-19 pandemic.

The lawsuit itself was initially filed on October 21st, just weeks before the rapper’s death. “Lucid Dreams” currently has more than 1.3 billion plays on Spotify alone, making it one of the most-streamed songs on the platform.

Others were quickly dragged into the high-stakes action.  Grade A Productions, Taz Taylor, Nicholas Mira, BMG Rights Management, Kobalt Music Services, and Interscope Records were also named defendants in the action. Ultimately, the defendant group filed a ‘Statement of Death’ with the U.S. District Court to remove Higgins’ name from the defendant list, which shifted the attention towards naming a proper representative of the Juice WRLD Estate.  That ended up being Jarad’s mother, who was obviously in a poor state of mind to deal with aggressive litigation.