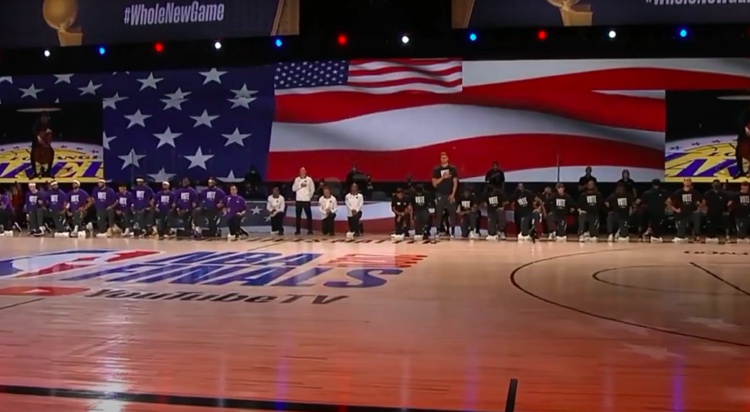 Cellist Ben Hong of the LA Philharmonic plays the National Anthem to start Game 1 of the NBA Finals between the Los Angeles Lakers and Miami Heat. Most players kneeled.

The National Basketball Association (NBA) is now considering the elimination of the National Anthem at the start of games, beginning with the 2021 regular season.

We’ve written about some of the controversy surrounding the Star Spangled Banner — including a movement to replace it entirely. Now, the National Anthem is potentially getting nixed entirely by the NBA for all future games, according to preliminary discussions shared with Digital Music News.

Instead of a moment of silence and observation, stadiums and games might instead shift immediately from high-energy team introductions into the opening tip-off, skipping the Anthem ceremony entirely. According to details shared on the altered opening sequence, the quick segue might make the elimination less noticeable — or at least that’s the thought process.

Another possibility is that the National Anthem would be played prior to any team introductions, with players and coaches remaining in their locker rooms.  In that latter scenario, the stirring Anthem finale would move directly into team introductions.  Sources underscored that nothing has been decided or set in stone, and different teams and stadiums could make different decisions on the matter.

Interestingly, the information is leaking from sources on the advertising and agency side, a group that is now carefully considering its commitments for next year and closely observing the NBA’s decisions. According to one agency working with several potential NBA advertisers, the decision is likely to receive mixed reviews from a group attempting to determine the reaction from its target audiences.

Earlier, we reported that advertisers were preparing to renegotiate or eliminate their commitments for next year given surprisingly low ratings for the NBA Finals.

Despite the presence of superstars like LeBron James and Anthony Davis, ratings for the pivotal Game 6 on Sunday evening dropped 57% from the comparable finals game between the Toronto Raptors and Golden State Warriors in 2019.

Nielsen reported a Game 6 draw of just 5.6 million, which is the lowest-rated NBA Finals game ever recorded.  Astoundingly, a head-to-head NFL regular season matchup between the Minnesota Vikings and Seattle Seahawks drew more than double the NBA viewership with an audience of 11.4 million.

That was hardly the exception for the NBA Finals, however. The 6-game series scraped all-time viewership lows overall, though the reasons for the ratings crash are now being debated. A seriously-delayed and shortened season is one possible culprit, with crowd-less ‘bubble’ matchups also another possible contributing factor. Others have pointed to a heavy emphasis on political messaging. At least one poll has indicated that politics has had a serious impact on viewership.

In reaction to that finding, NBA commissioner Adam Silver has stated that the 2021 season will not feature on-court or in-game political messaging.  But it’s unclear whether players will go along with that plan, regardless of the possible ratings implications. And given the extremely stratified environment in the United States, it’s entirely possible that removing political messaging would alienate a completely different segment of the audience.

Throughout the recent NBA Finals matchup between the Los Angeles Lakers and Miami Heat, players almost unanimously used the Anthem opener as a visible protest vehicle, with few exceptions.

That includes the aforementioned LeBron James, who has been a vocal proponent of racial equality and has kneeled for every Anthem.

And he certainly wasn’t alone. Despite some stunning musical interpretations of the National Anthem — including a stirring cello variation by noted Los Angeles Philharmonic assistant principal cellist Ben Hong to open the series — players weren’t in a patriotic mood.  Against a backdrop of fluttering flags, several kneeling players started walking away before the stirring finale was even finished.

Undoubtedly, the National Anthem’s absence from a major sporting league like the NBA could come as a shock to many fans. But given that most players are kneeling for the Anthem anyway, the NBA appears to be gambling that no Anthem is one way to minimize the controversy.