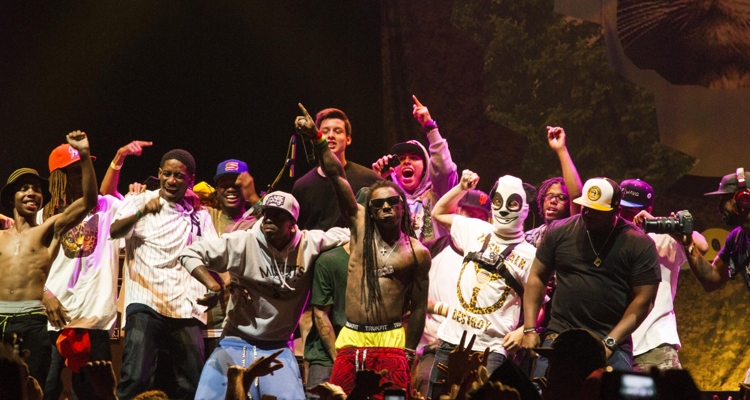 Lil Wayne has been charged with gun possession as a convicted felon after last year’s private jet raid.

Last year federal authorities boarded Weezy’s private jet in Miami and found a gold-plated gun. The 38-year-old rapper was just charged today, despite the discovery happening last year. The federal offense carries a potential sentence of up to 10 years in prison, with charges brought by the US Attorney’s Office in Miami.

Lil Wayne already has a felony gun possession conviction in New York from 2009.

As of right now, it’s not clear why the US government waited so long to bring charges against the rapper. Lil Wayne recently threw his support behind President Trump during the 2020 Election, a move that raised the rapper’s profile significantly. Lil Wayne has a home in Miami Beach and will face a court in Miami on December 11th.

The private jet was searched by federal authorities two days before Christmas, on December 23rd. Miami-Dade Police called in federal authorities after receiving a tip that the plane may be carrying weapons and marijuana. Weezy was upfront with federal officers when they entered the aircraft to conduct the search.

The Miami Herald reports that the rapper informed officers of the gold-plated gun in his luggage before the search began. Weezy told federal authorities the gun was a Father’s Day gift. Prosecutors say they also found bullets, cocaine, marijuana, and nearly $26,000 in cash on the plane.

So far, Lil Wayne is not facing any drug-related charges – only felony gun possession.

As the new charges arrive, Lil Wayne’s attorney Howard Srebnick has questioned their validity. “Carter is charged with possessing a gold-plated handgun in his luggage on a private plane,” his lawyer says. The situation raises questions of whether the mere possession of a firearm by a non-dangerous felon is a crime.

Convicted felons are barred from gun possession and ownership under federal law. However, Weezy’s attorney argues that the case is fit for Supreme Court review.

He argues that the issue of a convicted felon possessing a gun has not been argued as a constitutional question under the 2nd Amendment. Supreme Court appointee Amy Coney Barrett has written that only dangerous felons should be barred from gun ownership.