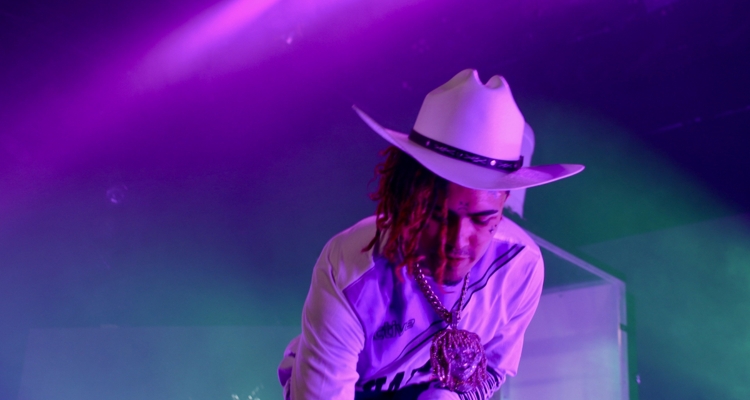 Lil Pump is cashing in on his Trump-granted nickname, “Lil Pimp” with a brand new single.

Donald Trump mistakenly referred to the rapper as “Lil Pimp” when he introduced him at a Michigan rally. But Lil Pump has embraced the nickname with a new single “LIL Pimp Big MAGA Steppin.”

The Florida rapper best known for his single “Gucci Gang” has recreated a similar flow. His lyrics are full of references to Republican talking points and he even takes a swipe at Joe Biden.

“F**k a bad bitch, send her back to ISIS,
Look at all my diamonds, they bitin’,
Got a Rolls truck with no license, ooh
And I’m screamin’ out ‘F**k Sleepy Joe.”

The rapper is referencing another nickname President Trump uses to refer to President-Elect Joe Biden. Social media has reacted pretty predictably to the new single dropping, with plenty of harsh words for the rapper.

“It’s lame as f**k at this point,” someone on Twitter writes. “This n**ga didn’t even vote; his music not bringing in enough money, so he got the check from Donald. Shoulda stayed in college.” Lil Pump was one of several rappers who publicly endorsed Donald Trump for President in October.

50 Cent earned ire from social media after comments he made about the differences in tax plans. “All I gotta say is Trump 2020 bitch,” the rapper wrote on Twitter. “Fuck I look like paying a extra 33 in tax for Biden, bitch ass n***ga. F**k Sleepy Joe, Trump 2020 bitch.” Both Lil Pump and 50 Cent repeated President Trump’s nickname for Joe Biden.

So, is it true that Lil Pump, real name Gazzy Garcia, isn’t a voter? Yup, it’s absolutely true. The Smoking Gun published proof and the Miami-Dade County Elections Department later confirmed those findings. Lil Pump isn’t alone as a non-voter, though. Snoop Dogg admitted to voting for the first time this year.

Even President Obama weighed in on some of the rappers who support Trump. He says the lifestyle rap glorifies is the same life Trump admires, so there’s a commonality there. Ice Cube also attracted some negative attention after he met with the Trump administration and discussed his Platinum Plan. Cube later took to Twitter to let his fans know he didn’t care who he had to work with to benefit the Black community.