Do the Grammys Matter Anymore? The Latest Data Doesn’t Look So Hot 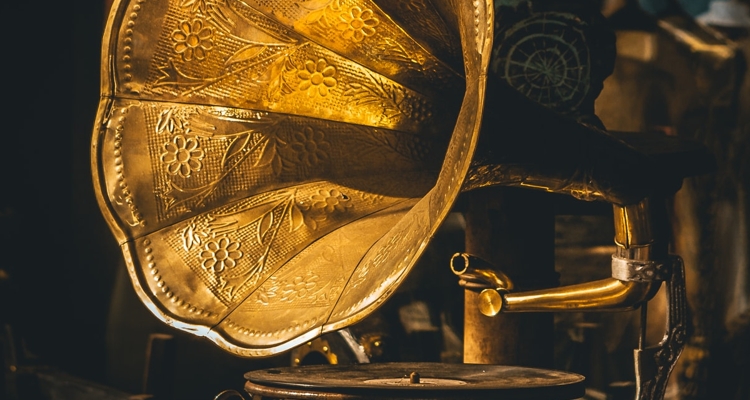 Are the 2021 Grammy Awards in for a rude ratings surprise? The latest data shows that fans are far less interested in the Grammys — and it’s not just because of the controversy or snubs.

The Recording Academy announced the 63rd annual Grammy Awards nominations earlier this week on Tuesday. But the announcement has been met with sharp criticism from superstar artists – and total ambivalence by the general public. First, let’s dig into what the artists are saying and how that might be impacting fans.

Almost immediately following the latest nominations, The Weeknd — who was notably absent from the list of nominees — took to Twitter to blast the Recording Academy for the nominations this year. “The Grammys remain corrupt,” the Canadian pop star wrote. “You owe me, my fans, and the industry transparency.”

Drake chimed in, defending The Weeknd’s stance while questioning the show’s relevance. “I think we should stop allowing ourselves to be shocked every year by the disconnect between impactful music and these awards and just accept that what once was the highest form of recognition may no longer matter to the artists that exist now and the ones that come after,” Drake tweeted. “It’s like a relative you keep expecting to fix up, but they just can’t change their ways.”

Drake’s comments on how the perception of the Grammys is changing appears to be spot-on.

Last year, the Recording Academy became mired in an ugly political battle just days before its Grammys telecast aired. The infighting witnessed the abrupt firing of then-CEO Deborah Dugan, with appropriate lawsuits and accusations dominating the days leading into the event.

The fallout was swift, with a number of superstars potentially skipping the showcase to sidestep the controversy. After the event, viewership ratings hit a 12-year low, skirting 2008 levels.

That was followed by brutal ratings drops for competing awards shows. The Billboard Music Awards, which aired in October, plunged 55% to an all-time low. Similarly, the recently-aired American Music Awards plunged 50% to another all-time low, even though viewers were theoretically glued to their couches amidst continued COVID-19 lockdowns.

People are tuning out of kudos-fests. And leading into the 2021 Grammy Awards, the preview data looks similarly foreboding.

A cursory glance at Google Search trends this year shows that public interest in The Grammy Awards is seriously waning. Whereas previous years caused quite a spike in Google Search results, this year was barely a blip. People seem to care far less about this year’s Grammy Awards – and artists appear similarly unmoved. 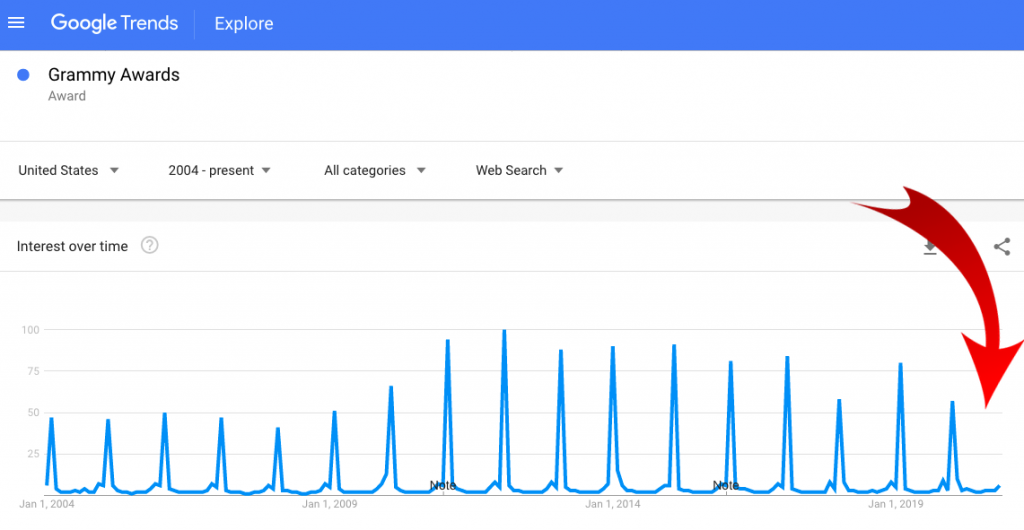 The large peaks in the chart above represent the actual Grammy Awards airing. But those little spikes are the Grammy Awards nominees announcements, and this year, pre-game interest is significantly down.

All of that suggests that music fans are moving away from awards shows. But the continued drubbing by artists — especially on the hip hop side — isn’t helping.

Nicki Minaj recently brought up her old beef with the Recording Academy and Grammy Awards from 2012 when she was a new artist.

“Never forget the Grammys didn’t give me my best new artist award when I had 7 songs simultaneously charting on Billboard and bigger first week than any female rapper in the last decade,” the rapper wrote on Twitter. “They gave it to the white man, Bon Iver.”

After the outrage and uproar on Twitter over The Weeknd’s snub, Recording Academy interim president and CEO Harvey Mason Jr. responded. “We understand that The Weeknd is disappointed at not being nominated,” he says. “I was surprised and can empathize with what he’s feeling. His music this year was excellent, and his contribution to the music community and broader world is worthy of everyone’s admiration.”

He’s right – The Weeknd’s work is worthy of everyone’s admiration. But the Grammy Awards might not be the best way to show it anymore.