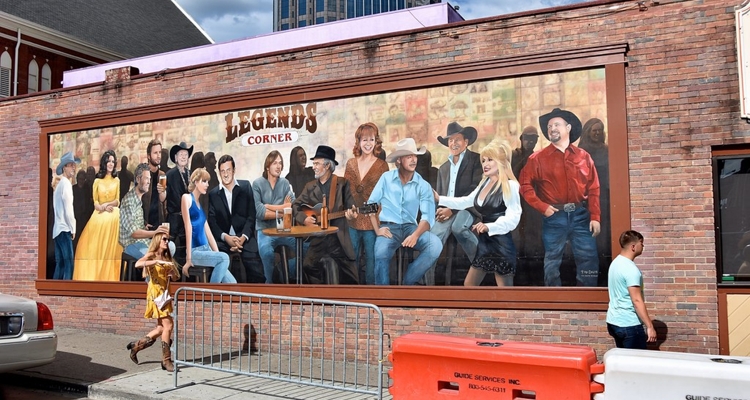 A photo of the ‘Legends Corner’ mural before Taylor Swift was removed (Photo Credit: FaceMePLS / CC by 3.0).

Taylor Swift has been replaced with Brad Paisley on the Legends Corner bar mural in Nashville.

The mural on the side of the bar includes several of country music’s most famous artists. While she graced the mural, Swift was accompanied by Keith Urban, Reba McEntire, Dolly Parton, Loretta Lynn, Garth Brooks, Blake Shelton, Willie Nelson, and Johnny Cash. Now that Swift has transitioned to pop, the mural was updated to feature Brad Paisley.

The move has prompted some outrage from fans, who insist the removal is unwarranted. Swift was the first woman to win the Pinnacle Award at the 2013 CMA Awards. She also won entertainer of the year back in 2009 and 2011. Despite her contributions to the country music genre, it seems her fame as a pop music star was the reason for the removal.

With the removal of Swift from the mural, now only three female country singers are celebrated on the Legends Corner artwork.

Tim Davis, the artist behind the mural, says that local bargoers don’t like Swift’s appearance on the mural. He told USA Today that many spat on Swift’s picture because they felt betrayed by her rise in the pop genre.

“I have heard many complaints here in Nashville about Taylor being on the wall with country legends since she is currently focused mainly on pop. Some inebriated bar-hoppers have spit on her image specifically, feeling betrayed by her venture from country. I guess this is to be expected, but by and large, the people of Nashville love her, as do I,” he says.

The decision to remove Taylor Swift from the mural was made by the owners, not the artist. Davis started a $35,000 GoFundMe to help raise money to paint a new Taylor Swift mural in downtown Nashville to honor her separately from her country music roots.

“As a music powerhouse in her own right, and having introduced many to the country music genre, she should be featured on a prominent mural in Music City that showcases both her country roots and her earned status as the queen of pop,” the GoFundMe page reads.

The Legends Corner mural may no longer feature Taylor Swift, but other country stars will be added.

Davis has confirmed that the owners have commissioned him to add more country artists in January. That includes another female artist he’s already “sketched out between Dolly Parton and Garth Brooks.” While Davis has yet to reveal her identity, my money would be on Carrie Underwood or perhaps Shania Twain.