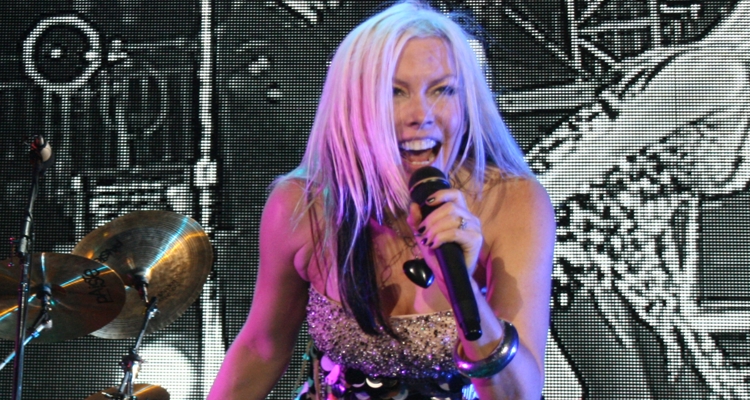 Nunn and other artists have come under fire online for playing the gig, which required no social distancing. “I am truly sorry I performed at Mar-a-Lago and would not have done so if I’d known what I learned while I was there,” Nunn writes on the official Berlin Facebook account. “My goal in performing was not to support a political party. I see now that that’s not the way it appeared, and I am apologetic for that as well.”

She continues, “I thought I was current on all COVID news everywhere, but clearly, I was not. I was shocked by Florida and Mar-a-Lago’s lack of regard for the pandemic, and if I’d known I would never have gone. Once I fulfilled my contractual obligation, I left the event as quickly as I could. It is a mistake I regret. I took a COVID-19 test yesterday and tested negative.”

Many Berlin fans were offended to see Terri Nunn appearing at the Trump Mar-a-Lago event.

They took to Twitter and Facebook to express their disappointment. Nunn’s frequent appearance at Pride festivals and support of the gay community felt like a betrayal to those who became Berlin fans. Nunn addresses this in her statement on Facebook, too.

“My apologies to those in the LGBTQ community who thought my performance was a statement against them,” Nunn writes. “I have been and always will be fully supportive.”

Some of Nunn’s Berlin bandmates have distanced themselves from her performance. Co-founder and former member David Diamond was quick to address reports that Berlin played the show, rather than Nunn herself.

“A number of news outlets have reported that ‘Berlin’ played Mar-a-Lago for NYE,” he tweeted. “I want to make clear that I was not at this show, nor did I ever plan to attend. I spent the evening at my home in Truckee.”

Other performers for the Mar-a-Lago NYE party have come under fire, too. The Beach Boys, Vanilla Ice, and Dayne all received backlash for appearing at the event.