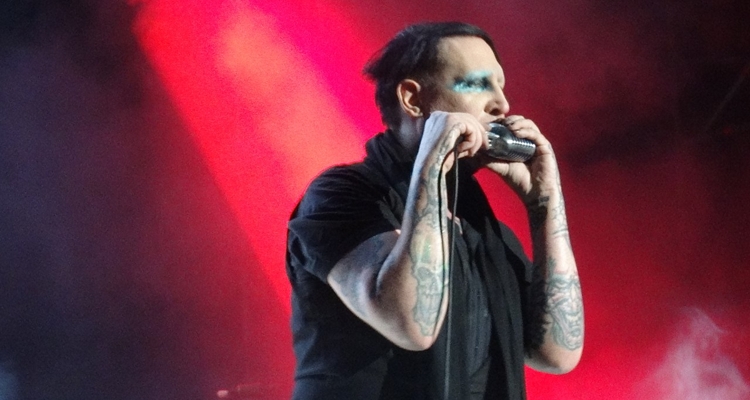 Update: Following these abuse allegations, Marilyn Manson has been dropped by his label, Loma Vista Records.

Wood posted about her experience with the singer on Instagram early this morning. “The name of my abuser is Brian Warner, also known to the world as Marilyn Manson,” she begins in her post. “He started grooming me when I was a teenager and horrifically abused me for years.”

“I was brainwashed and manipulated into submission and I am done living in fear of retaliation, slander, or blackmail. I am here to expose this dangerous man and call out the many industries that have enabled him before he ruins any more lives. And I stand with the many victims who will no longer be silent,” Wood writes.

After her post, at least four other women came forward with abuse allegations against Marilyn Manson.

Several of them detailed their harrowing experiences, including sexual assault and psychological abuse. Many said there were forms of coercion, violence, and intimidation in their relationships with the singer. Manson has denied similar sexual assault allegations in the past, and has also dismissed the latest allegations as untrue.

Rachel Evan Wood now stars in HBO’s WestWorld, but she first met Manson when she was 18. He was 36. In 2018, Wood was part of a House Judiciary Subcommittee panel that helped to get the Sexual Assault Survivor’s Bill of Rights passed in all 50 states. At the time, she had not named Marilyn Manson as her abuser.

“My experience with domestic violence was this: Toxic mental, physical, and sexual abuse which started slow but escalated over time, including threats against my life, severe gaslighting and brainwashing, waking up to the man that claimed to love me raping what he believed to be my unconscious body,” Wood testified to the Subcommittee.

Wood also testified before California legislators on behalf of the Phoenix Act. That act altered the statute of limitations for crimes that involve domestic violence in California. Wood and Manson were engaged in 2010 before the couple eventually broke up.

In an interview with Spin magazine in 2009, Manson was quoted, “I have fantasies every day about smashing her skull in with a sledgehammer,” referring to Wood. Representatives for Manson categorically denied that the comment was intended as a threat. He claimed it was “obviously a theatrical rock star interview promoting a new record, and not a factual account.”

In May 2018, a police report was filed against Manson for unspecified sex crimes that took place in 2011. In August 2018, the Los Angeles’ District Attorney’s Office declined to pursue the case because of a lack of evidence.