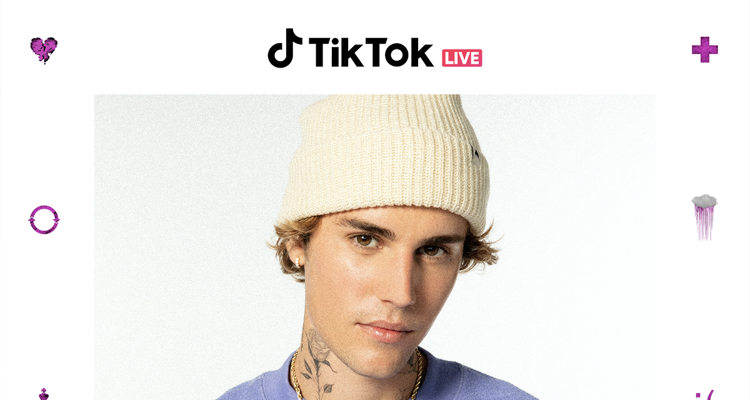 Bieber announced ‘journals live from the drew house’ would feature songs from his fan-favorite 2013 album, Journals. Released as a groundbreaking digital-only collection of singles, it makes sense that Bieber would create a new TikTok record with a live performance of the album.

Journals was the companion to Bieber’s second full-length documentary feature, Believe. Journals amassed more than three billion streams worldwide, and is one of the most popular albums among his fans. In TikTok’s announcement post, Bieber says he’s excited to bring the show to life digitally via streaming.

“Journals is one of my favorite projects, and I’ve never performed it live. I’m grateful to TikTok for helping me bring this show to everyone on Valentine’s Day,” Bieber said. He quickly amassed a following of 20.3 million people on TikTok and regularly gives fans behind-the-scenes looks at his life via the platform.

Bieber’s first TikTok featured a clip of his hit song “Yummy,” which generated over 117 million views and set a record.

Now TikTok says the stream of the Journals album was the most-viewed live stream in the company’s history. The performance also pushed the album past the three billion all-time streams, thanks to the resurgence of his hits “All That Matters” and “Heartbreaker.” Bieber’s latest single, “Anyone,” also ascended to the top spot on the iTunes album sales chart in the US over the weekend.

Bieber is also trending worldwide on TikTok with his Benny Blanco collab, “Lonely.” TikTok says that song has amassed more than 872,000 video creations and more than 5 billion views on the platform. It’s a testament to how enduring TikTok has become for taking music to new viral heights.

Fleetwood Mac experienced a resurgence in their popularity thanks to TikTok. The Rumours album shot to the top of the charts over the summer, thanks to a skateboarder singing along with Stevie Nicks to “Dreams.” The popularity of that video on TikTok gave Fleetwood Mac its most successful week ever on streaming platforms.

“I almost didn’t post it, but I was like, ‘Let’s post it and see what it does within an hour,'” Nathan Apodaca, the creator, told NPR. Within an hour on TikTok, the video saw 100,000 views and has amassed over 35 million since then. The video itself inspired 134,000 tribute videos, all with over 500 million views between them.