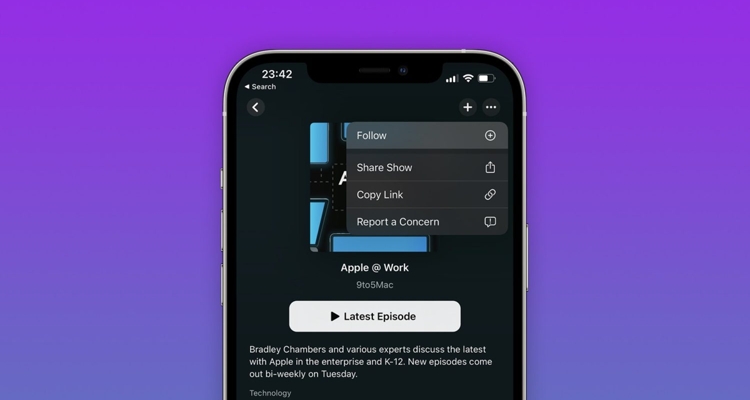 The Apple Podcasts app is changing how users interact with podcasts. Subscribe is now follow – here’s why.

With the latest iOS 14.5 update, Apple changed the terminology in the Apple Podcasts app. It’s a small change, but it’s an important one. Users now ‘follow’ podcasts on the app instead of subscribing to them. That’s because users tend to think of subscriptions as paid products.

Edison Research conducted a survey and found that 47% of users associated the word ‘subscribe’ with paid content. That results in fewer people using podcasts because they think it costs money to subscribe to a podcast.

The use of the word subscribe may have stunted podcast listening growth – and why it’s taking a backseat to follow. People are familiar with following their favorite users on Instagram, Twitter, TikTok, and other social media networks. The word ‘follow’ better imparts the intention of showing interest in a podcast – to receive updates when new episodes are ready to listen.

“Today, Apple, Spotify, and YouTube are the three most widely used services to play podcasts. The word subscribe means ‘automatically download for free’ in exactly none of them,” says Tom Webster of Edison Research. Apple has been retooling its Podcasts app to better compete with Spotify’s emerging dominance.

Back in January 2021, Digital Music News reported on rumors of Apple launching a podcast subscription service.

Apple is developing its original podcasts and shows for Apple TV, so an incoming podcast subscription comes as no small surprise. There are also rumors that Spotify is prepping to do the same – offer a new premium podcasting subscription.

Spoken word content growth has been on the rise since 2014. It accounts for 26% of listening time in the 13+ demographic in the United States in 2020 alone. That’s a 3% rise year-over-year compared to 2019. At least 55% of the U.S. population listens to at least one podcast. 54% of the U.S. population say they have listened to at least one audiobook, too. 30% of all smartphone listening is some form of spoken word content – from podcasts, talk radio, to audiobooks.