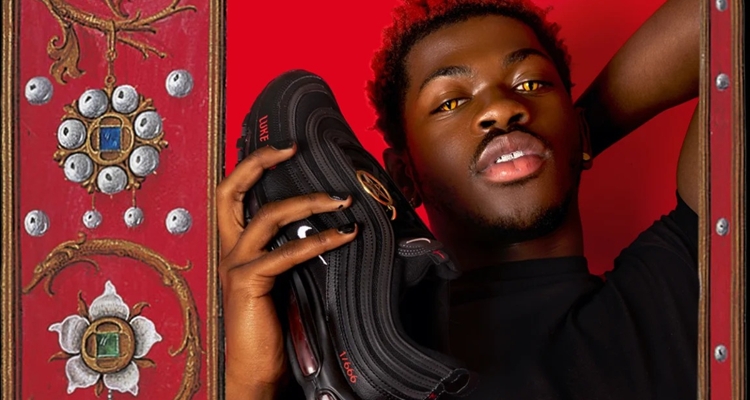 The collab shoes drew big attention on social media for the marketing campaign behind them. Only 666 pairs were made available to buy for $1,018 a pair. The price is in reference to the Bible verse Luke 10:18, which describes the angel Lucifer’s fall from heaven. The shoes were done in collaboration with the rapper Lil Nas X, whose recent single features him diving the devil a lap dance.

The Nike lawsuit alleges MSCHF Product Studio Inc. infringed and diluted its trademark with the shoes. Lil Nas X is not named as a defendant in the lawsuit. The shoes are a customized version of the Nike Air Max 97 that anyone can buy. The Nike logo is still featured prominently on the shoes and in the marketing photos released. Marketing materials confirm the sneakers contain “one drop of human blood” in the sole.

The shoes sold out within a minute of becoming available. Lil Nas X held back a pair for himself to give away to someone on Twitter who retweets his tweet. In the Nike lawsuit, the company says it is in no way connected with the project, and it was done “without Nike’s approval or authorization.”

“There is already evidence of significant confusion and dilution occurring in the marketplace, including calls to boycott Nike in response to the launch of MSCHF’s Satan Shoes based on the mistaken belief that Nike has authorized or approved this product,” the lawsuit reads.

Nike has asked the court to immediately stop MSCHF from fulfilling the 665 orders it has collected. It is also requesting a jury trial to seek damages for the harm done to Nike’s brand. Social media erupted over the Satan Shoes, and boycotts for Nike were all over Twitter for most of the weekend.

Representatives for MSCHF and Lil Nas X were not available for comment. The shoes were part of a promotional campaign for the 21-year-old rapper’s latest song. With the release of “Montero,” Lil Nas X also wrote an open letter to his past self about his promise to never come out.

The whole song embraces the imagery of hell and burning for eternity. “Y’all love telling gay people we going to hell, then get mad when I decide to go?!” he asked his critics on TikTok. He even called out Governor Kristi Noem for her criticism of the shoe controversy. “Ur a whole governor, and u on here tweeting about some damn shoes. Do ur job!” the rapper wrote.