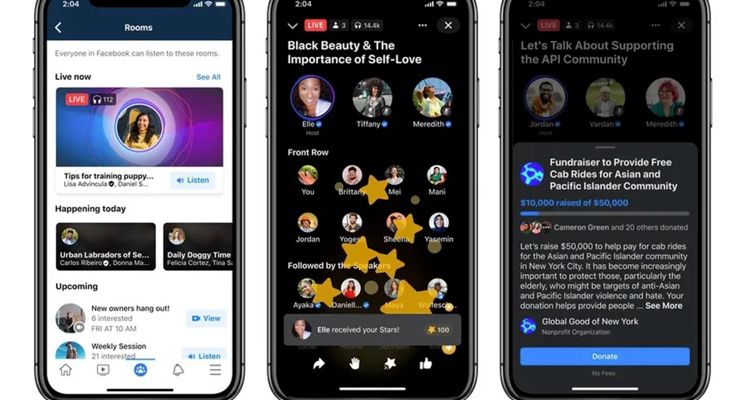 Facebook is bringing its ‘Live Audio Rooms’ to several services this summer to compete with Clubhouse.

After a $4 billion funding round, Clubhouse is seeking to retain its audio dominance. But that fight is about to get a lot harder this summer after Facebook launches its Live Audio Rooms. The feature will be available to groups and public figures to test before its broader rollout to Facebook Messenger.

Users will be able to record their conversations and distribute them, a key difference from Clubhouse. Chats that happen on Clubhouse stay on the service, making them feel more ephemeral like Snapchat. Facebook will allow users to charge for access to its Live Audio Rooms through a subscription or a one-time fee. Think of all the one-off concerts musicians will be able to perform online.

To promote its Live Audio Rooms, Facebook is taking a page of out TikTok’s book. The company is releasing a feature to allow users to clip Soundbites from their recordings. These soundbites can be shared as short-form audio clips and into the ‘Discover’ audio feed. It works much the same way TikTok does to discover new video, but for audio.

Facebook CEO Mark Zuckerberg says Soundbites are similar to Reels, with small bite-sized clips to get people interested in the content. “The high-level picture here is that we think that audio is, of course, also going to be a first-class medium and that there are all these different products to build across this whole spectrum,” Zuckerberg says.

Facebook sees itself as a way to help podcast fans find new content. That will come through a partnership with Spotify to bring its player over to Facebook. Spotify users will be able to listen to their music and podcasts right from their Facebook News Feed.

“Our ambition has always been to make Spotify ubiquitous across platforms and devices, bringing music and podcasts to more people,” a Spotify spokesperson told Digital Music News. “Our new integration with Facebook is another step in these efforts. We look forward to a continued partnership with Facebook, fueling audio discovery around the world.”