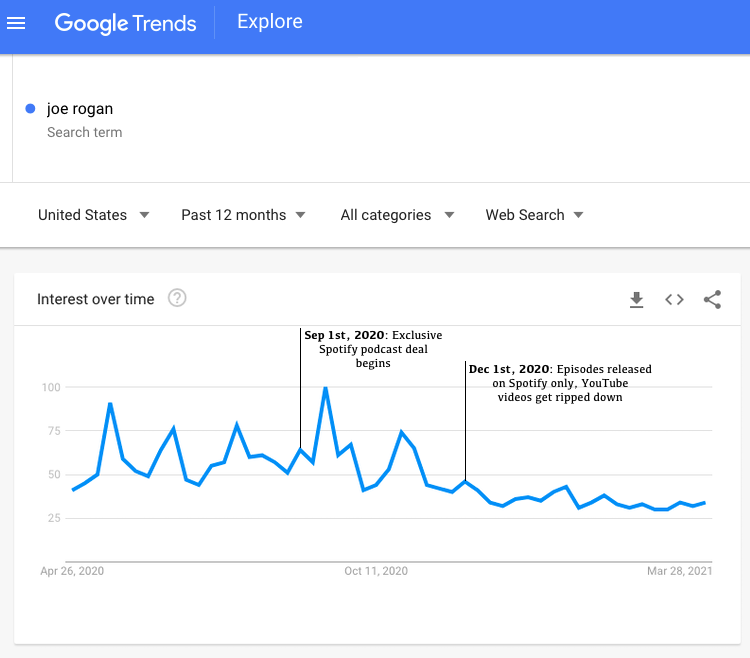 Is Joe Rogan losing relevance following his exclusive podcast deal with Spotify? That’s been a difficult question to answer, though Google search traffic data now indicates a serious drop in broader interest since the deal began.

Joe Rogan reportedly received a handsome $100 million for inking his exclusive podcast deal with Spotify. But that deal, which shifted all episodes onto the Spotify platform, may be damaging the podcaster/comedian’s overall influence.

Spotify hasn’t disclosed any listener data on The Joe Rogan Experience, so it’s been impossible to determine if followers have dropped off (or increased) after the shift to the streaming platform. Anecdotally, plenty of Rogan fans publicly swore off the podcast after the switch, especially after episodes stopped appearing on YouTube — and older episodes got scrubbed from the video platform (incidentally, Spotify also deleted 42 Joe Rogan Experience episodes prior to the transition, a move that may have also damaged overall audience interest).

Others simply reported that they weren’t listening to Rogan anymore — but again, it’s been hard to draw any conclusions.

But now, there’s data suggesting that overall interest in Rogan has waned since his exclusive Spotify shift. According to Google Trends search traffic data, searches of ‘Joe Rogan,’ including related searches like ‘Joe Rogan podcast’ or ‘Joe Rogan MMA,’ have dropped roughly 40% since Spotify announced its deal last year.

Spotify announced its Rogan deal in May of 2020, but Rogan didn’t exclusively start recording for the platform until September 1st. By December 1st, episodes were only available on Spotify, and earlier episodes on YouTube and other streaming platforms were also ripped down. After that point, Google search volumes experienced a protracted drop.

In the six months leading up to the show’s December 1st exclusive start, Google Trends data shows an average search index for ‘Joe Rogan’ of 57.9.  After the week of December 1st and during 2021, that index value has dropped to 34.6, which constitutes a 40.2% drop in search volume.

That suggests that Rogan’s episodes aren’t drawing as much attention now that they’re contained within the Spotify platform. But this isn’t a paywall problem: Spotify isn’t limiting The Joe Rogan Experience to Premium subscribers, suggesting other reasons for the lowered impact. One major difference could be YouTube, which is highly viral, more open, and easier to use than Spotify — not to mention tightly integrated into Google Search itself.

Plenty of Rogan followers complained about the shift away from YouTube, and those complaints got noticed. Sensing a major functionality compromise, Rogan demanded that Spotify integrate video into its platform to promote viral sharing of his shows. That request was granted, though Spotify’s video experience is still clunky at best.

But perhaps things are getting better. Back in March, Rogan stated that Spotify is ‘slowing getting its s—t together,’ but noted that comments will probably never be part of his show anymore.

“It’s not as smooth as it probably should have been when we first transitioned over in December, but [Spotify] just wasn’t ready for the volume,” Rogan explained. “They had never had a show — first of all, they created video because of the conversation we had about this podcast. They wanted the podcast to be audio-only, and my manager was like, ‘think about the Elon Musk moment when Elon Musk was smoking weed.’ That is a viral moment that only happens with video.”

Beyond that, Spotify hasn’t integrated comments into its podcast platform — and may never. “That’s where YouTube shines over all over forums, is that they have that comments section, and I think Spotify needs to recognize that,” Rogan stated. “And I’ve tried to talk to them about that, and there’s been some discussion about putting comments — but one of the things they said is, ‘if we put comments on one podcast, we have to put them on all podcasts.’ But I go, ‘why? Just put them on mine, just put them on mine.’”