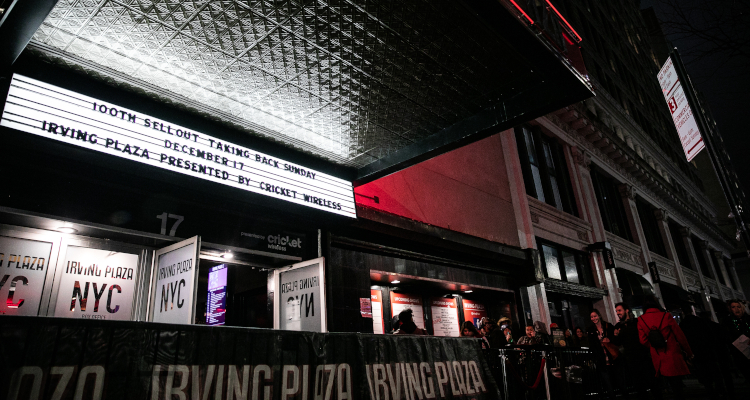 Less than one week after unveiling plans for a 5,000-person venue (dubbed “The Terminal”) in Houston, Live Nation has announced that it will reopen New York City’s Irving Plaza “after an extensive multi-million dollar renovation.”

The Beverly Hills-based concert promoter just recently detailed its ambitious plans for the 43-year-old Irving Plaza, which closed in 2019 for renovations. During this years-long construction process, “Live Nation focused on enhancing the overall concert experience throughout the venue for both artists and fans while maintaining the venue’s 19th century charm.”

Included in this collection of upgrades to Irving Plaza – which is owned by the Polish Army Veterans Association of America – are “improved sightlines” and “state-of-the-art sound/lights.” As an aside, the Manhattan performance hall will still accommodate as many as 1,200 standing guests simultaneously – or up to 400 seated individuals.

High-profile acts such as Paul McCartney, the Ramones, and Green Day have played Irving Plaza, and on the musician side, the new-and-improved venue will feature “two fully renovated balcony level artist dressing rooms,” which have “direct stage access and an adjacent green room with a private bathroom and amenities.”

Lastly, in terms of Irving Plaza’s bolstered offerings, an “expanded lobby and bar area” are set to serve as “multifunctional” sites for future performances, including with regard to merch sales, meet-and-greet events, and even “individually curated” happenings.

In another positive development for fans (and especially artists), Live Nation has also revealed a series of Irving Plaza reopening shows, kicking off with an August 17th concert from Ashley McBryde, as part of her recently announced This Town Talks Tour.

Noah Cyrus is scheduled to appear at the venue 10 days after McBryde, with Guided by Voices, Albany-based State Champs, and Ben Folds representing just some of the other artists who will entertain fans at Irving Plaza across September and October.

Moreover, Live Nation has booked Ripe for 2021’s final two days, and other Irving Plaza gigs (including a February 25th appearance from The Jungle Giants) are in place for 2022’s first quarter.

Artists are taking steps to resume touring after the unprecedented disruption ushered in by the COVID-19 pandemic.

Dashboard Confessional this week detailed plans for an extensive unplugged tour (expected to kick off in early September, not counting gigs at Bonnaroo and the Alaska State Fair), for instance, whereas Green Day, Fall Out Boy, and Weezer are now preparing to embark on their long-delayed Hella Mega Tour, starting with a late-July date at Dallas’s Globe Life Field.