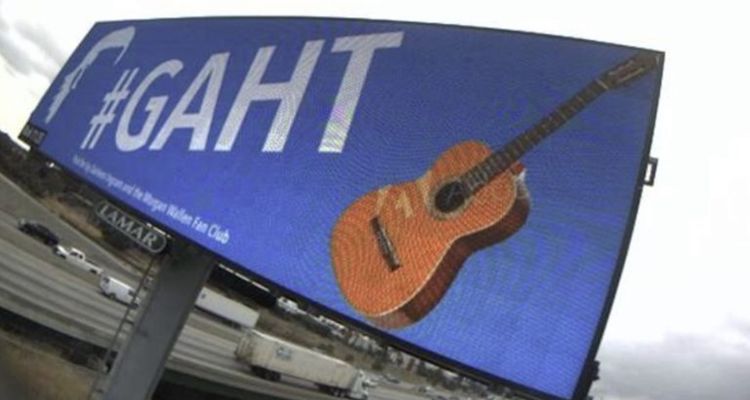 After being banned from the Billboard Music Awards, Morgan Wallen fans have bought another billboard.

A recent statement released by Dick Clark Productions confirmed the awards would not include Wallen on the show. That included performing, presenting, or accepting any of his wins.

“It is heartening and encouraging to hear that Morgan is taking steps in his anti-racist journey and starting to do some meaningful work,” the statement from Dick Clark Productions reads. “We plan to evaluate his progress and will consider his participation in future shows.”

Supporters of the country music singer have rallied around his exclusion from music awards. When the ACM awards refused to acknowledge Wallen, fans bought a billboard in downtown Nashville.

The backlash Wallen has faced online and from streaming services has slowly subsided over time. A video of him using a racial slur in February circulated online, prompting the singer to step away and re-evaluate his situation. He has since prompted fans to stop battling cancel culture in his name – but to little avail.

Fans are particularly incensed with the BBMAs for using a blue box instead of Wallen’s image on their website. “Behind that blue box is a human being,” the fan who shared the picture of the billboard told Music Mayhem. “A living, breathing, human being. He has feelings just the same as you, and I do, so to represent him as a ‘blue box’ is degrading and uncalled for.”

Wallen’s fans say the country singer has atoned for actions. The fan-funded the billboard to make a statement, putting Wallen’s mullet, guitar, and his catchphrase #GAHT front and center – over a blue box. The billboard appears at the Microsoft Theatre exit on the I-5 freeway. The same group of fans who bought the Nashville billboard is responsible for this one in Los Angeles.

Those same fans are planning to fund a billboard in Sneedville, Tennessee, Wallen’s hometown. That billboard will run through May 24, the day after the BBMAs.