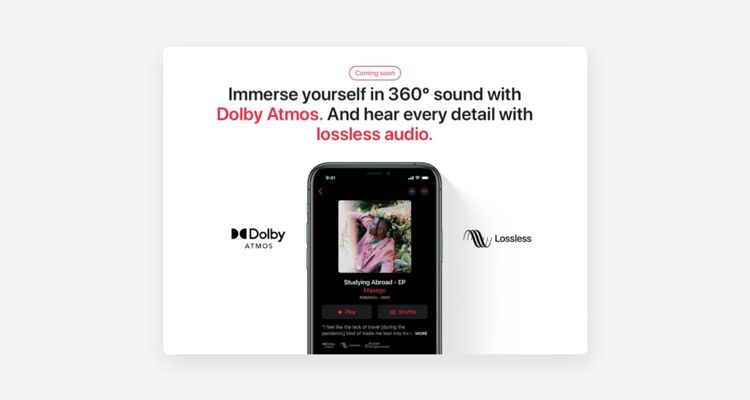 Some subscribers to the service report seeing options for Apple Music lossless audio and Dolby Atmos in the Settings app. However, those options have since disappeared and have not returned. Apple first announced lossless quality audio back in May – but confusion quickly cropped up.

After the announcement, there was some confusion about whether HomePod speakers and AirPods Max will support the high-fidelity formats. Apple has since clarified that confusion by saying HomePod speakers will receive an update to support lossless audio sometime in the future. Meanwhile, AirPods Max won’t be able to stream in lossless audio quality – even if they’re wired.

While lossless audio has made the biggest splash in the music industry, spatial audio is the true audio frontier.

Ask any gamer how important spatial audio is to re-creating an experience, and you’ll hear countless reasons. Apple executives know spatial audio is important for an immersive experience. Eddy Cue says he believes all but a small set of people can tell the difference between lossless tracks.

“The reality of lossless is, if you take 100 people and you take a stereo song in lossless, and you take a song that’s been in Apple Music that’s compressed, I don’t know if 99 or 98 can’t tell the difference,” Cue said in an interview.

Apple Music’s Zane Lowe says the focus on spatial audio will change how people listen to music. He likens it to a progression from mono, to stereo, to spatial.

“Spatial is an immersive experience with sound moving around you in different directions. We have only had that kind of experience before in cinema. Have you ever wondered how that would work with music? I have,” Zane said in a recent interview.

One key feature of 3D spatial sound is that it’s focused exclusively on sound positioning simulation. That’s closer to building a soundstage for a gaming environment than any type of music creation before it. It gives artists control over sound design like attenuation or even creating realistic doppler effects.