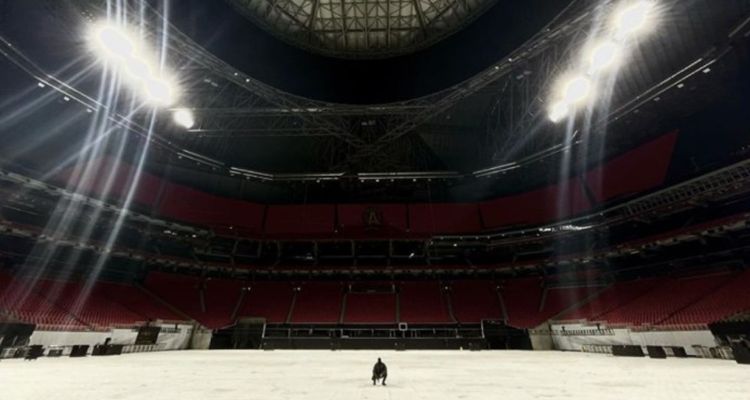 The event will take place on Thursday, August 5 at the Mercedes-Benz Stadium in Atlanta. Tickets for this second event will go on sale Monday, August 2 at 10 am EST. West premiered the album at his first release party, but didn’t release Donda to the world.

The event streaming on Apple Music reportedly broke the Apple Music Global livestream record with 3.3 million viewers. West has been living at the Mercedes-Benz Stadium since the first premiere on July 22. TMZ reports West holed up at the Stadium to finish the album.

Fans quickly spotted Kanye wandering around the Stadium at several events. Donda is Kanye West’s 10th studio album and is named after his late mother. She died at the age of 58 in 2007 due to complications from plastic surgery. It’s reported that the upcoming album will feature at least fifteen tracks.

Kanye’s album rollouts are never a simple affair, but Donda is one of the most elaborate yet. Rumors and rumblings of a new Kanye album started in March 2020. Then in June, Kanye announced his partnership with the GAP. On July 13, 2020 his mother’s birthday, West released a new two-minute song.

The track ‘Donda‘ opens with a recording of his mother reciting ‘Sound of Da Police.’ West soon deleted the post. A week later, after tweeting the small snippet, Kanye began to tease the Donda album. On July 21, 2020, Kanye tweeted the supposed tracklist for the Donda album. It featured 12 songs and appeared to be 39 minutes in length.

On July 25, 2020, Kanye West tweeted the Donda album cover – the day after its supposed release. On July 28, 2020, Lil Baby posted a video of himself at Kanye’s Wyoming ranch to work on new music. Soon Kanye began focusing on his 2024 presidential run – seemingly putting Donda on the backburner.

On July 18, 2021, Kanye hosted a surprise listening party for the new record in Las Vegas. Justin LaBoy attended the party saying, “the production is light years ahead of its time, and the bars sound like he’s broke and hungry trying to get signed again. Any artist who plans on dropping soon should just push it back.”

On July 19, 2021, the first listening party at the Mercedes-Benz Stadium in Atlanta is announced. The event is slated for July 22 plays to a sold-out 42,000 stadium.

It’s now August and Donda is no where to be seen, but Kanye is still hard at work on it. On August 5, the Apple Music Twitter account tweeted a livestream. “Live from Mercedes-Benz Stadium in Atlanta,” the tweet reads. It appears to show Kanye and collaborators locked in a small room, discussing the album. Or doing push-ups, lifting weights, sleeping, or more.