Twitter’s Subscription-Based Super Follows Are Here – What It Means 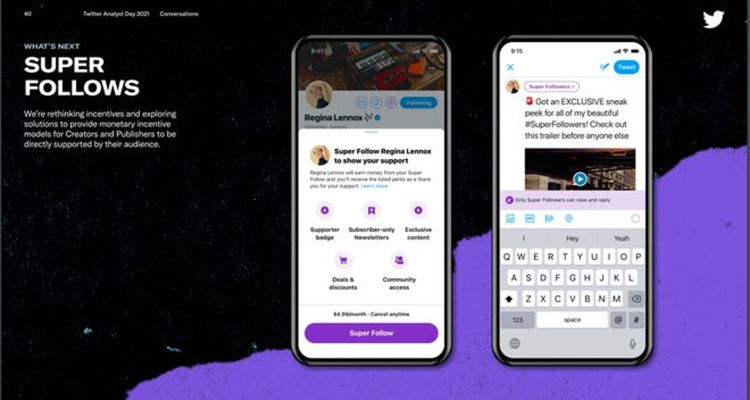 Twitter has launched a subscription-based feature called ‘super follows’ to take on Patreon.

The new super follows feature allows content creators to generate monthly revenue from a subscriber-only content feed. People in the United States and Canada on iOS can begin to super follow select accounts. Twitter says it will make the feature more widely available to everyone on iOS in the next few weeks.

Twitter creators can set monthly subscription fees of $2.99, $4.99, or $9.99 a month to monetize their audience. Most creators offer behind-the-scenes content, extra bonus features, or special engagements. Are you a content creator who wants to apply for access to Super Follows or Ticketed Spaces? You can check your eligibility in the Twitter app.

Users of these new features will be given 97% of the revenue generated after in-app purchase fees. (That 30% is skimmed off the top by Apple and Google.) However, once a user crosses $50,000 in lifetime revenue, Twitter begins to take a 20% cut.

People who super follow another Twitter user earn a badge for their profile. The badge also appears when replying to a creator’s tweets.

Twitter is experimenting with many features to see what sticks. It recently shut down its Fleets feature – Snapchat-like temporary posts that disappear. The feature debuted in November 2020 and lasted less than a year before Twitter shut it down due to low adoption.

Twitter is also offering ticketed spaces to creators as a way to monetize their audio rooms. Spaces are rooms that a user can host to discuss a wide variety of topics, with moderation features built-in. Ticketed Spaces allow content creators to schedule performances with a built-in audience.

The feature is currently in beta, much like super follows. Both are ways the company plans to attain at least $7.5 billion in annual revenue from its 315 million daily active users by the end of 2023. Twitter is working hard to justify itself as a platform for sharing exclusive content – but Patreon already exists.