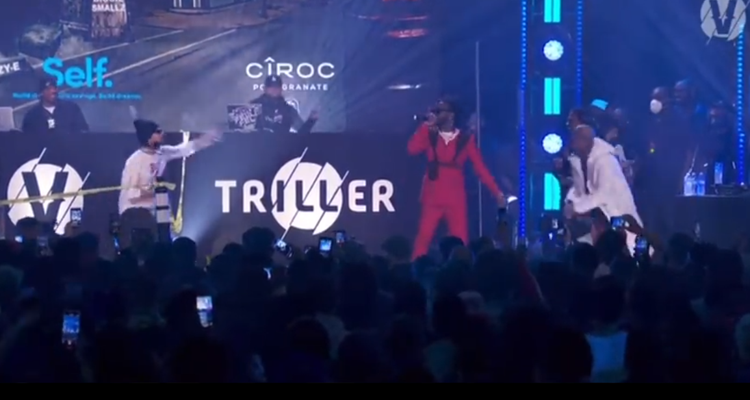 Verzuz rap battles are supposed to be a friendly competition. The Bone Thugs-N-Harmony vs. Three 6 Mafia battle turned into a brawl.

Bizzy Bone did not take kindly to the trash talk that accompanies the event on stage. The event went down on December 2 at the Hollywood Palladium and was broadcast on Triller and Instagram Live. The two groups went toe-to-toe for a few rounds, before Bizzy Bone addressed Three 6 Mafia.

“Hey yo, hey. Before we even get started, you ugly motherf*ckers ain’t fit to be mocking me while I’m on the motherf*cking stage. Like straight the f*ck up,” the rapper yelled before throwing a bottle of water at T6M. Juicy J then launched toward the group and broke through the group and blows were exchanged.

Three 6 Mafia’s Gangsta Boo called out Bizzy Bone for his actions. “Bizzy Bone, you a hater. You must not have taken your pills.” The group’s security members then flooded the stage – turning the rap battle into a full-on brawl.

After the stage was cleared and the two groups came back, minus Bizzy Bone, the battle continued. Three 6 Mafia whipped out their hit “Azz N’Titties” and Bone Thugs responded with “Days of Our Livez.” Bizzy Bone later apologized and hugged it out on stage with Juicy J.

“I want to apologize to everybody the f*ck out there, on both sides. I’m not trying to f*ck this shit up,” Bizzy said. “Pardon me. Let’s keep the party motherf*cking going.” Lil Wayne and Lil Jon made surprise guest appearances during the Bone Thugs-N-Harmony vs. Three 6 Mafia Verzuz battle.

Bizzy Bone was busy dissing the Memphis crew on Instagram before the Verzuz battle even started.

“They don’t want to be called devil worshippers. Well wtf is you and wtf is your name three sixes for?? What’s that a acronym for? That is the mark of the beast, is it not? Y’all grew up in the church so you knew the ramifications behind naming ya self that to make people think you wold your soul for riches and fame. Now you got your money and u wanna act like nobody can call you out on it? Y’all got m f’d up.”