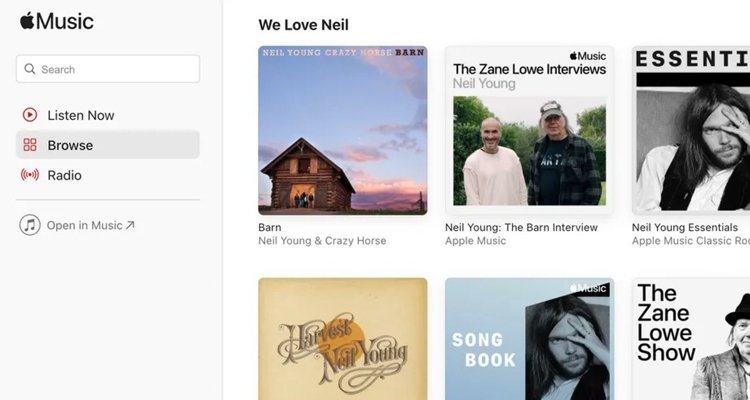 Apple Music is calling itself the home of Neil Young after the songwriter pulled his music from Spotify.

Both Apple Music and Tidal have prominently displayed Neil Young on their homepages. Apple’s presentation at the top says ‘We Love Neil Young.’ The company is also stepping up its marketing by courting people on social media who are looking to jump ship in their haste to leave Spotify in the #ByeByeSpotify campaign.

Apple Music is sending out tweets and playlists with Neil Young’s music, letting fans know where they can find it. It’s capitalizing on a competitor’s mistake as much of the general public is drawing a line in the sand here.

Digital Music News has highlighted how social media is responding to Neil Young’s music removal from the service. Others have pointed out that the aging folk singer-songwriter doesn’t have the demand that an artist like Taylor Swift or Drake may command.

The decision to boot Neil Young and keep Joe Rogan has rubbed many people the wrong way. But it should come as no surprise to anyone who is paying attention – Spotify wants to be the ‘Netflix of audio’ rather than ‘just another music streaming service.’

If your favorite podcasts are exclusive to the service, it’s much harder to leave just because a man with principles moved his music elsewhere. But it also could be a tipping point for Spotify’s market dominance in North America.

According to data gathered by analysis agency Midia Research, Spotify commanded around 33% of the music streaming market in 2020. That figure dipped to just 31% in 2021, so Spotify does appear to be losing market share to competitors.

Spotify still grew in terms of absolute number of subscribers, but its market share compared to competitors is contracting. With events like this, new music streaming subscribers may seek Spotify alternatives like Apple Music, Tidal, Deezer, or Pandora.