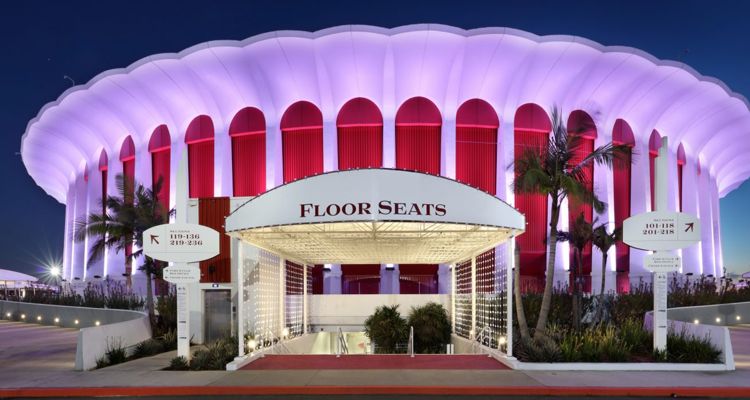 The Forum in LA has completed its first naming rights deal with South Korean automaker Kia. It’s now known as the Kia Forum.

Kia America formally announced that it purchased the naming rights for the arena from Forum owner Steve Ballmer. It’s the first U.S. naming rights deal for the automaker. The new name doesn’t come as much of a surprise, as the Kia logo was visible on-site since last week.

“Kia America is proud of our history in Southern California going back to the establishment of our U.S. headquarters here in 1992,” says Russell Wagner, Vice President of Marketing for Kia America. “We all celebrate now being part of one of the most historic, and emotionally-connected live entertainment and sports venues in California – if not the world.”

“We are thrilled to be a part of the entertainment and excitement of live music and events at the Kia Forum moving forward,” Wagner adds. Kia America is based in Irvine, California, while the Kia Corporation’s international headquarters are in Seoul, South Korea. Financial details of the naming rights to Kia Forum were not disclosed.

“We’re proud to partner with Kia and weave together our history with an innovative future, while continuing our dedication to the SoCal community,” says Geni Lincoln, General Manager and Senior Vice President of Live Events for the Kia Forum. “We look forward to merging the entertainment and automotive industries, broadening our mutual commitments to diversity, sustainability, and creativity.”

Former Microsoft CEO Steve Ballmer purchased the Forum for $400 million two years ago. That deal was likely to resolve a legal dispute with previous owner Madison Square Garden Co. over Ballmer’s plans to build a new sports arena for the Clippers. MSG officials argued the project violated agreements with the city of Inglewood in regards to a competing arena in the same area.

The Kia Forum is just the latest of Los Angeles’ arenas to don new names. Last year, the Staples Center was renamed the Crypto.com Arena. The Kia Forum is primarily a live music venue now, though it previously served as the home for the Lakers and the Kings.