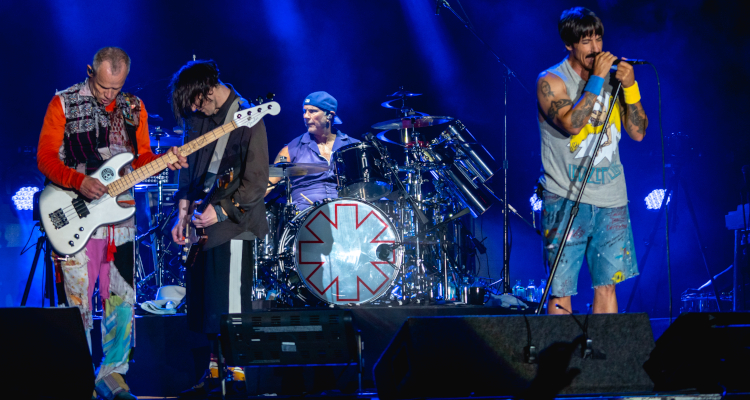 Last month, following the unexpected passing of Taylor Hawkins, the Foo Fighters canceled their tour and other planned performances. Now, the Red Hot Chili Peppers have been tapped to replace the group behind “My Hero” at the New Orleans Jazz & Heritage Festival.

New Orleans Jazz Fest organizers – whose event is scheduled to initiate on April 29th and conclude on May 8th – just recently announced the addition of the Red Hot Chili Peppers to the 2022 lineup. The four-piece rock band is specifically preparing to take the stage at the Shell-sponsored festival at 5:30 PM on Sunday, May 1st, following sets from Randy Newman and many others earlier in the day.

Lionel Richie and Death Cab for Cutie are poised to close out the New Orleans Jazz Fest’s first day, with other booked acts including The Who, Jason Isbell, and Nelly (Saturday the 30th); Luke Combs (Thursday, May 5th); Elvis Costello, Busta Rhymes, and The Black Crowes (Friday, May 6th); Stevie Nicks and Lauren Daigle (Saturday the 7th); and 88-year-old Willie Nelson (Sunday the 8th).

(Notwithstanding these and other big-name artists who have agreed to play the New Orleans Jazz Fest, the more than 50-year-old happening’s website emphasizes: “Approximately 85% – 90% of bands presented at Jazz Fest are active members of the Louisiana music community.”)

Tickets to the New Orleans Jazz Fest – which, like several other music festivals, was canceled in both 2020 and 2021 – remain available to purchase, the event’s website shows. Single-day passes are currently priced at $80 apiece, but their cost will jump to $90 at the gate.

A little over one month following the newly announced festival appearance, the Red Hot Chili Peppers (who released their first post-catalog sale album seven days back) are booked to perform for fans in Spain. The group will then take its stadium tour to the Netherlands, Slovakia, Hungary, Italy, the UK, Ireland, Belgium, France, and Germany through the remainder of June and into mid-July.

The Red Hot Chili Peppers’ North American tour leg is slated to begin after that and run into late September (including stops in Colorado, California, Texas, Florida, Washington, Tennessee, and North Carolina), ending with an appearance at Kentucky’s Louder Than Life Festival.

Earlier this week, The Weeknd and Swedish House Mafia replaced Kanye West as Coachella 2022 headliners, and LL Cool J announced the lineup for his Rock the Bells Festival, which is scheduled to take place in Queens on Saturday, August 6th.