The Weeknd + MSCHF Partner for Playable Saw Blade Album ft. “Out Of Time” 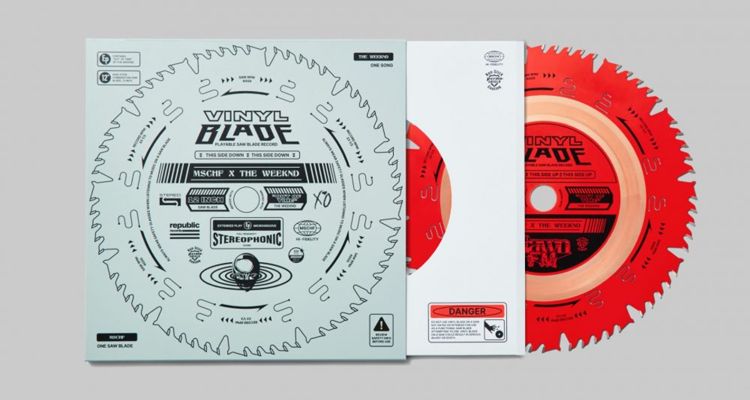 The Weeknd and MSCHF are debuting a playable saw blade single of “Out of Time” from Dawn FM.

The collaboration is part of MSCHF’s infamous drops – the same company behind Lil Nas X’s Satan Shoes. The Brooklyn-based art collective is regularly involved in releases that push societal boundaries.

The latest release combines the “Out of Time” single with a 12″ saw blade. “The record groves are engraved into a copper band via direct metal mastering, which is then inset in the saw blade body,” the press release says. “The blade itself is a carbide-tipped 12″ combo blade–for both rips and crosscuts–with powder-coated color and graphics.”

There were only 25 of these playable saw blade albums available in a blind auction where bidding started at $1,000. The FAQ notes that the sawblade shouldn’t be used as an actual saw.

“Attempting to use the vinyl blade on a saw could result in serious injury or death,” the site reads. It also notes that the album may not be very useful as an album, either. “A turntable adaptor is included, but official documentation notes that the Vinyl Blade is “significantly heavier than a standard vinyl record” and that the copper grooves used to press the album “may wear your stylus down faster than a normal record.”

At least Lil Nas X’s Satan Shoes collaboration was actually a wearable item. That collaboration kicked up a huge fuss online because the shows featured Satanic symbols and were made with “actual human blood.” Both MSCHF and Lil Nas X faced legal backlash from Nike over the Nike Air Max 97s that were customized in the collaboration.

According to the MSCHF team, those 666 pairs of sneakers contained two fluid ounces of red ink and ‘one drop of human blood in the sole. The blood donors were all taken willingly from the MSCHF team. Originally, the sneakers were priced at $1,018 – a reference to a Bible verse about Satan. Now the Satan Shoes are going for as much as $2,999 on third-party markets like eBay.