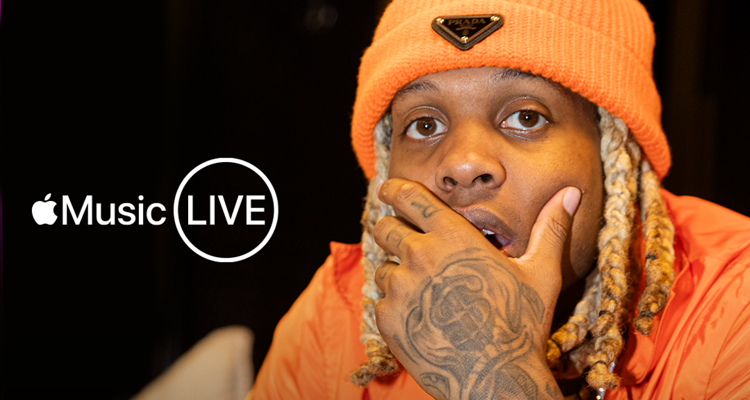 The next artist to be featured for an exclusive Apple Music Live stream is Lil Durk. Here’s the details.

Lil Durk will be the next artist featured in the Apple Music Live streaming concert series. The Chicago drill rapper’s June 29 performance in Los Angeles will be streamed to 165 countries via Apple Music. Lil Durk scored his second #1 hit with 7220 in March 2020. Upon its release, it was the second-biggest rap album of 2022 by first-week streams on Apple Music worldwide.

“Apple Music has been a big partner in my growth as an artist these last few years,” Lil Durk says about the partnership. “I appreciate them giving me a platform to share my live show to the world. I’m ready to turn up with the fans in L.A. later this month.”

117 Lil Durk songs and collaborations have featured on Apple Music’s Global Daily Top 100. Four of those songs have hit the #1 spot on that playlist. Lil Durk has also achieved two top 10 songs on the Billboard Hot 100 chart.

Apple Music is focusing heavily on providing live concert access to some of the biggest musicians in the world with its Apple Music Live series.

Last month the series launched with an exclusive livestream of Harry Styles’ “One Night Only in New York,” celebrating the release of his latest album. Anyone in the Los Angeles area interested in attending the Apple Music invite-only Lil Durk event can register here.

In January 2022, Lil Durk teamed up with Morgan Wallen to release “Broadway Girls,” which blends rap and country. The song hit the #1 spot on Billboard’s Hip-Hop chart, giving Morgan Wallen hits on both the country and hip-hop charts.