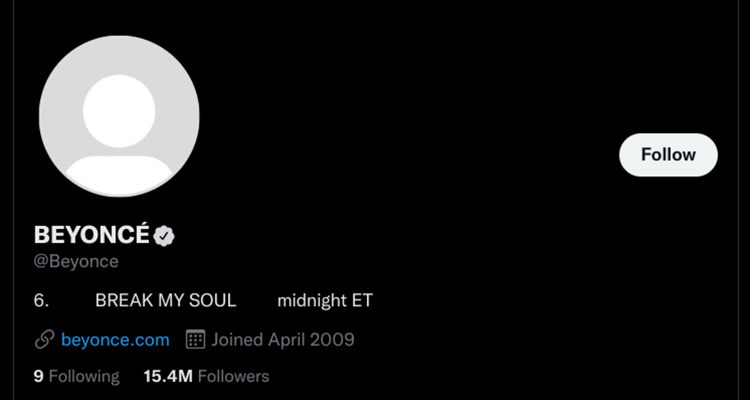 Beyonce will drop her first single called “Break My Soul,” from her upcoming album Renaissance at midnight.

The legendary pop singer changed her social media profile to slowly tease the release of the upcoming album. Early Monday morning the description for her Twitter bio changed to read, “6. BREAK MY SOUL midnight ET.” Many people expected Beyonce to debut her new single to celebrate Juneteenth.

Beyonce announced on Thursday that her new album will arrive on July 29. The album will feature a mix of dance and country-leaning tracks, according to reports from Variety. Fans believe they’ve uncovered information that the album will include 16 tracks and that it’s a multi-part release since it is dubbed Act 1 on her website.

She also gave some hints about her upcoming music in an interview in 2021 with Harper’s Bazaar. She even subtly dropped the title of the album during that interview. “With all the isolation and injustice over the past year, I think we are ready to escape, travel, love, and laugh again,” Beyonce said at the time. “I feel a renaissance emerging, and I want to be part of nurturing that escape in any way possible.”

“I’ve been in the studio for a year and a half. Sometimes it takes a year for me to personally search through thousands of sounds to find just the right kick or snare. One chorus can have up to 200 stacked harmonies,” she continued. “Still, there’s nothing like the amount of live, passion, and healing that I feel in the recording studio. After 31 years, it feels just as exciting as it did when I was nine years old. Yes, the music is coming!”

This will be Beyonce’s first solo album since she dropped her 2016 release, Lemonade. She worked with her husband Jay-Z to drop The Carters in 2018 and in 2019 she dropped Homecoming – an album of her headline performance at Coachella. She also released the companion album for The Lion King that featured several new songs by the singer.