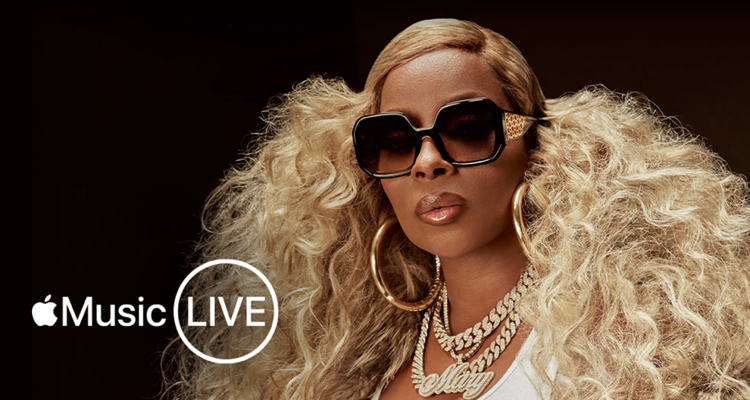 Mary J. Blige will perform at the United Palace in New York as part of Apple Music’s live concert series, which has featured performances from artists such as Harry Styles and Lil Durk. Local fans can register for free for a chance to snag a ticket, though ticket availability is on a first-come, first-served basis. The concert will stream exclusively on Apple Music Live on July 27 at 7 pm PST for everyone unable to attend the recording in person.

“The last year of my career in particular has been an exciting ride,” says Blige. “From continuing to act, to recording and releasing my 15th studio album, growing and expanding different business like Sun Goddess and Sister Love Jewelry, to performing at the Super Bowl, launching my Strength of a Woman Festival and Summit and now getting ready to go back on tour, it feels amazing to take this opportunity to celebrate, reflect and have an intimate night with my fans through this platform Apple Music is providing me.”

In addition, to celebrate the performance, Apple Music will be devoting the entirety of July 27 to “all things Mary,” featuring exclusive programming, music, and interviews showcasing her legendary career. The celebration also marks the 30th anniversary of Mary J. Blige’s landmark debut album, What’s the 411?, on July 28, 1992.

Between the release of her fifteenth studio album, Good Morning Gorgeous, and her performance in the Super Bowl LVI halftime show, Mary J. Blige elevated herself to new heights in 2022. The week following her halftime performance saw a 325% increase in streams of her catalog on Apple Music compared to the same week the previous year.

Songs new and old for the artist reached the Daily Top 100 in countries across the globe. Notably, her track “Family Affair” charted in the top 100 in several countries, including the US, Canada, Denmark, and Norway. Blige is also a regular guest on the Zane Lowe Show and Ebro show on Apple Music 1.