Legacy artists, old rockers and major labels still rule the world of UK TV advertising, according to a new survey by sync specialist AdbreakAnthems.com.  The top musical choices to accompany ads for anything from snacks to detergent last year were Queen, the Rolling Stones and Blondie. 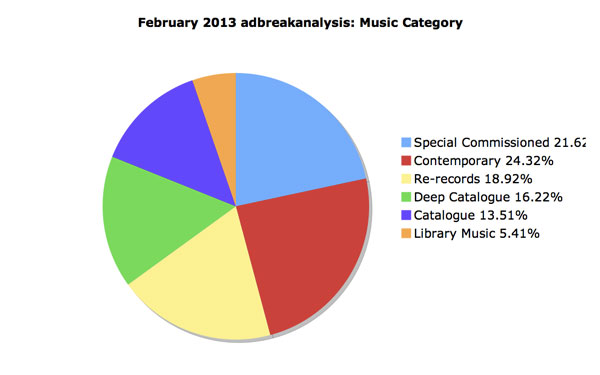 Through the past few decades, new or niche artists have experienced huge promotional value from songs featured on major adverts.  But the result has often been more “flash in the pan” than long-term success.  Babylon Zoo, for example, shot to the top of the UK charts in the mid-90s after having his ‘Spaceman’ track featured in a Levi’s jeans TV commercial, only to disappear into obscurity in less than a year.

Undoubtedly, there are powerful breakthrough successes.  When The Dandy Warhols first released the single ‘Bohemian Like You’ in August 2000, it failed to even break into the UK Top 40.  But when it was re-released a year later as it was the soundtrack of a Vodafone ad, it peaked at No 5.

More recently, in 2007, Canadian singer-songwriter Feist got a real boost to her career on both sides of the Atlantic after Apple used her song ‘1,2,3,4’ in an iPod Nano TV spot.

But these opportunities are few and far between.  As illustrated by the latest figures, advertisers tend to believe that the audience’s capacity to connect with the music through its familiarity is more likely to boost sales.

Queen’s knack for writing anthemic rock tunes took them to the top of the 2012 TV ad chart with five spots: ‘We Will Rock You’ (Persil), ‘We Are the Champions’ (Kronenbourg), ‘Who Wants to Live Forever’ (Walkers Crisps), and ‘You’re My Best Friend’ and ‘Another One Bites the Dust’ for Tesco.

The number two slot on the chart was taken by the Rolling Stones with ‘Paint it Black’ (Dior Homme perfume), ‘Start Me Up’ (Omega watches), ‘You Can’t Always Get What You Want’ (Sky Sports HD) and the Sonny Bono/Roddy Jackson-penned ‘She Said Yeah’ (Bleu de Chanel perfume).

Blondie came third with ‘One Way or Another’ (4OD), ‘Heart of Glass’ (George @Asda) and ‘Rapture’ (Baileys).

Both the Queen and the Stones recordings are owned by Universal.  Unsurprisingly, the largest record label group in the world is also the label with the most rights to synced songs last year.

The research does not reveal how much was paid for each use of the songs as these agreements are private.  It’s more than likely that the Stones, for example, would charge a pretty substantial fee for the use of their hit songs in a commercial.  Yet this seems to be a price worth paying for the brands.

However, using a cover of a familiar hit would bring that cost down.  Both the ‘We Will Rock You’ and ‘We Are the Champions’ ads used re-recordings.  So perhaps doing a cover of a famous old hit is a new artist’s best bet if they want to use an ad as a launch pad for their career.  It worked for Gabrielle Aplin, as her cover of Frankie Goes to Hollywood’s ‘The Power of Love’ for the John Lewis Christmas campaign proved.