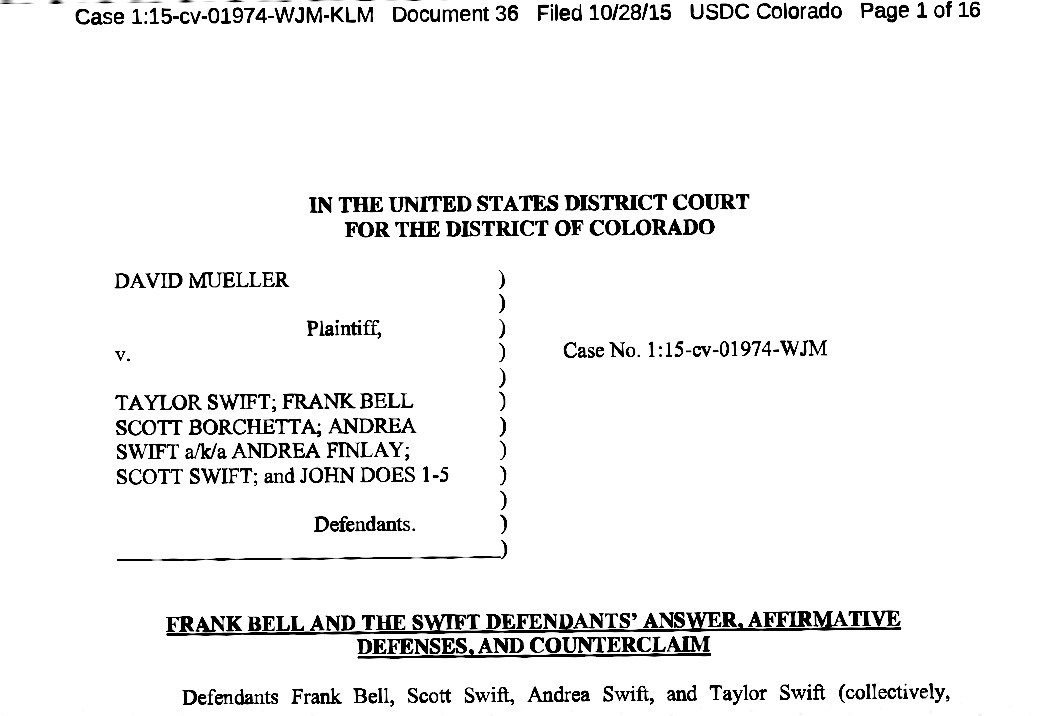 The accused DJ, David Mueller aka ‘Jackson’ of KYGO-FM Denver, sued Taylor Swift in September for making false accusations that led to his firing.  But Swift says she knows exactly who groped her ass backstage at Denver’s Pepsi Center on June 2nd, 2013, and it was Mueller.  “Mueller’s newfound claim that he is the ‘wrong guy’ and, therefore, his termination from KYGO was unjustified, is specious,” the freshly-filed countersuit alleges.

“Ms. Swift knows exactly who committed the assault, it was Mueller.”

In earlier court filings, Mueller alleged that circumstances and a picture prove that he wasn’t the culprit, while pointing to a case of mistaken identity.  The filing outlines the impossibility of Swift’s claim:

“The contention that Mr. Mueller lifted up Ms. Swift’s skirt and grabbed her bottom, while standing with his girlfriend, in front of Ms. Swift’s photographer and Ms. Swift’s highly trained security personnel, during a company sponsored, VIP, backstage meet-and-greet, is nonsense, particularly given that Ms. Swift’s skirt is in place and is not being lifted by Mr. Mueller’s hand in the photograph.”

That assertion is now being flatly contested by Swift and her attorneys, who outlined the incident in detail in the countersuit filing filed Wednesday:

“In the course of his meet and greet with Ms. Swift, Mueller intentionally reached under her skirt, and groped with his hand an intimate part of her body in an inappropriate manner, against her will, and without her permission. Mueller did not merely brush his hand against Ms. Swift while posing for the photograph: he lifted her skirt and groped her.”

Swift is planning to donate any proceeds won from the lawsuit to organizations that fight against sexual misconduct towards women.  Mueller, better known as ‘Jackson’ on the ‘Ryno and Jackson’ morning show on KYGO-FM, was earning an annual base salary of roughly $150,000 prior to his dismissal.

The full counterclaim, as filed October 28th in the US District Court in Denver: