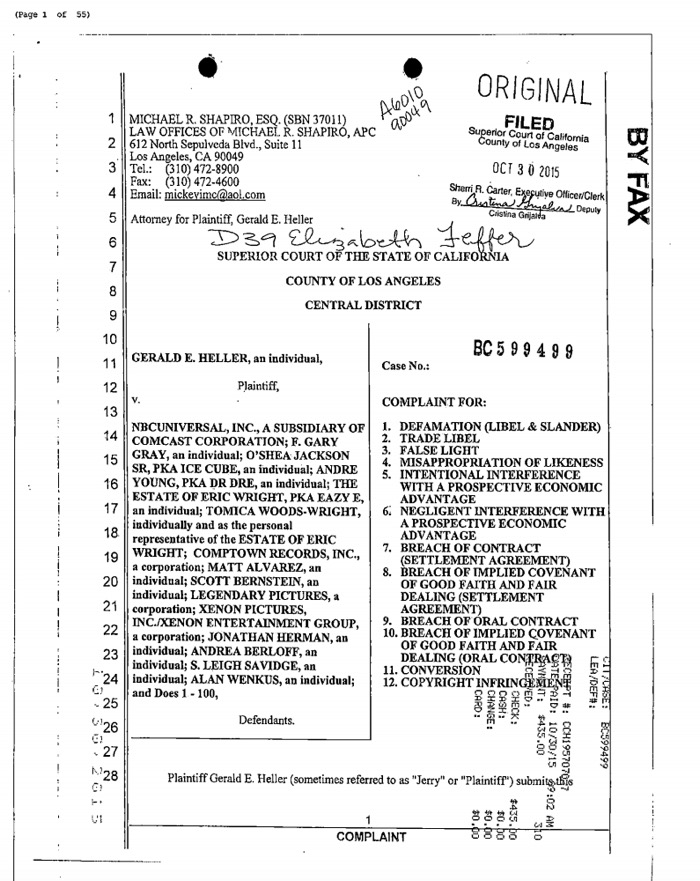 Last week, N.W.A manager Jerry Heller launched a massive lawsuit against the producers of the film Straight Outta Compton, based on a number of counts including defamation.  Now, Digital Music News has obtained a copy of the complaint filed with the Superior Court of California for the County of Los Angeles , which contains an impressive 29 different reasons for a lawsuit whose damages could reach $250 million.

According to the filed complaint:

1. The screenplay that Straight Outta Compton was based upon was actually created in part by Jerry Heller starting in 2001, in collaboration with Xenon Pictures.  Over four drafts were created between 2002 and 2008, though Heller alleges that Xenon sold his jointly-developed screenplay behind his back and violated his copyrights.

2. Heller did not authorize the use of his name or likeness within the film, or the portrayal acted by Paul Giamatti.

3. Despite this use of his name and likeness, Heller never received any compensation.  He was not even contacted by anyone involved in the film.

4. The film itself is ‘littered with false statements‘ that not only harmed Heller’s reputation, but ‘aimed to ridicule and lower [Heller] in the opinion of the community,’ while discouraging others from doing business with him.

5. In the film, Jerry Heller is falsely portrayed as the ‘bad guy’ in the movie who caused the demise of N.W.A.

6. In the film, Heller is falsely portrayed as a ‘sleazy manager’ who attempted to defraud N.W.A members Eazy E, Dr. Dre, and Ice Cube.

7. In the film, Heller is falsely portrayed as intentionally discouraging Andre Young (aka Dr. Dre) and O’Shea Jackson (aka Ice Cube) (both named defendants in the case) from seeking the advise of an outside attorney, with the intent of defrauding both rappers.

8. In the film, Heller is falsely portrayed as withholding a $75,000 check owed to Ice Cube.

9. In the film, Heller is falsely portrayed as inducing both Ice Cube and Dr. Dre into signing unfavorable contracts.

10. In the film, Heller is falsely portrayed as paying himself an unfairly large percentage of the earnings from N.W.A, while paying the members less than their proper share.

11. In the film, Heller is falsely portrayed as failing to pay bills and expenses for the group, while taking the money for himself.

12. In the film, Heller is falsely portrayed as intentionally keeping the members of N.W.A in the dark regarding finances.

13. In the film, Heller is falsely portrayed as enjoying a ‘lobster brunch,’ while intentionally delaying contract preparations for Dr. Dre and Ice Cube.

14. In the film, Heller is falsely portrayed as being fired by Eazy E (the estate of Eazy E and his widow, Tomica Woods-Wright, are named defendants).

16. Large portions of the film that are factually accurate were lifted without permission from a copyrighted book and screenplays authored (in whole or in part) by Heller (thereby constituting plagiarism and infringement).

17. In the film, the ‘pivotal scene’ in which Jerry Heller defends the members of N.W.A against racist police officers outside a Torrance recording studio, was stolen from a copyrighted work authored by Heller.

18. In the film, the ‘pivotal scene’ in which Eazy E is violently forced by Marion ‘Suge’ Knight to sign away Ruthless’ exclusive rights over Dr. Dre, was stolen from a copyrighted work authored by Heller.

19. The record-setting success of the film has created large and increasing damages for Heller, who continues to be ‘defamed, ridiculed, and robbed of his personal and financial rights’ on a massive and growing scale.

20. The false, defamatory and disparaging statements and portrayals about Heller are easily accessible not only by the general public, but Heller’s acquaintances and business partners; past, present and future.  Ultimately, Heller’s reputation has been damaged with millions of people, in the State of California and throughout the world.  The end result is inevitable damage to the ‘excellent professional reputation’ that Heller has established.

21. At various times, the defendants in this case ‘conspired with each other to engage in the acts’.

22. All of the false statements and portrayals listed above are both libelous and slanderous, and reflect a ‘reckless disregard or lack of concern for the truth…”

23. The negative and false portrayals in the film were not only intended to cause harm to Heller, they have caused actual harm (though specific incidents of that harm were not specified).

24. All of the above false statements and portrayals constitute ‘trade libel’ and ‘trade disparagement’ against Heller’s business interests.

25. The defendants in the case not only disregarded the truth, but they knew they were lying and the impact these lies would have upon Heller’s professional and personal life.

26. Among the many damages already felt by Heller are costs assumed to counteract the false statements and portrayals created by the defendants, upon which Heller will seek compensation.

27. The producers of Straight Outta Compton used Jerry Heller’s actual name in the film, as played by Paul Giamatti.  There was no effort to use a fictional name, like ‘Gary Beller,’ for example.

28. The film constitutes an invasion of privacy against Heller.

29. The producers of Straight Outta Compton, through their reckless and intentional actions, forced Heller to pay for legal services (attorneys’ fees) to defend his reputation.

For these offenses, Heller is seeking monetary damages of $35 million, punitive and exemplary damages totaling $75 million, and ‘all gains, profits and advantages’ enjoyed by the defendants (including profits from the film).