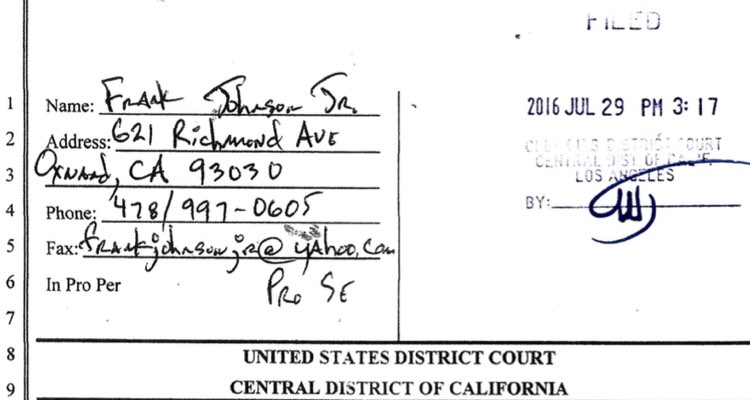 In the court document, Johnson Jr. claims that Eagle Rock Entertainment released a digital video with a live performance of Marvin Gaye in Montreux, Switzerland, apparently “without the proper release forms or payment to Mr. Frank Johnson Jr. AKA Frank Blair or my band members.”

The video may refer to the Marvin Gaye performance released to DVD after Eagle Rock entered into an exclusive agreement with Montreux Studios for access to its Festivals archives, including shows that date back to the 1960s.  According to Johnson Jr., the video has been selling units for years and “making millions of dollars.”

Johnson Jr. continues in the document that he has been trying this issue “for years, to no avail” and that he and musician Howard Earl Westbrook, “musician in the video… decided to do something about it.”  Johnson Jr. names himself as the arranger and co-leader for the Marvin Gaye tour, and that he “wrote original arrangements for the band.”  He also claims that he had no idea Eagle Rock “would maliciously release our work, and on purpose, not seek to imburse it’s [sic] performers.”

Johnson Jr. has also “suffered tremendously from this action” and pleads to the court for a remedy, threatening to “file the proper motions for immediate injunctions… to be stopped on all materials with Marvin Gaye or Robert Palmer containing my likeness.”  Johnson Jr. ends the filing, writing:

“Please, Your Honor, make these people pay dearlessly, so I can pay my fellow musicians and receive my monies [sic], and make this right.”

The Frank Blair named in the court document may refer to former Marvin Gaye bassist Frank Blair.  Johnson Jr. filed the document on June 10th, naming himself as his own lawyer, with cause of action being “Non-Payment for Performances and Labor” as “Eagle Rock & UMG made millions and did not give me or my members.”

The nature of the suit was listed as “Personal Injury.”  Demanding $4 million, Johnson also attached his monthly Social Security earnings to the filing, which amounted to $510.30 before deductions.

All calls to Frank Johnson Jr. have not been answered and Universal Music Group declined to comment, hanging up when pressed on the issue.