The Truth About SoundCloud Reposts (And Paid Promotion) 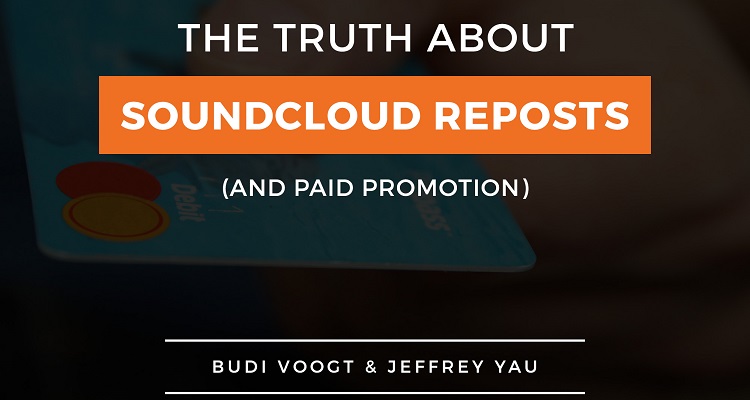 The following guest post comes from Budi Voogt, founder of EDM label Heroic Recordings and author of the popular book, The SoundCloud Bible, now in its third edition.

Ever wondered what a SoundCloud repost is worth?

The repost feature changed SoundCloud forever. By getting others to ‘repost’ your track, it’s published to the streams of all their followers. Technically, a repost by an influential account could lead to significant exposure.

You may have seen the ads on SoundCloud before: “$50 for a repost, will blast to 150K followers”. It’s an increasingly common phenomenon, and an appealing offer for most smaller artists.

Yet if you’ve secured reposts with large SoundCloud channels, either by trading (exchanging reposts with equally sized accounts) or via paid promotion, you’ve probably noticed that the resulting plays don’t match the expectations.

You’d expect a channel with 10 times more followers than you to reach 10 times as many people with a repost. Reality however, paints us a different picture.

We set out to investigate this issue and paired up with a reader, Tim (Moomimurr), to look at the data. The goal was to establish the value of a repost, by analyzing the play-to-follower (how many followers actually listen to a repost) ratios of different channels and defining the variables that affect this ratio.

SoundCloud has become a thriving ecosystem that hosts not just artists, but also record labels, artist collectives, promotional channels and networks. We covered these in our SoundCloud marketing & repost trading guide.

For beginning artists, the SoundCloud scene and ‘repost trading game’ may be hard to penetrate. Big channels prefer trading with big channels. At the same time, the offering of paid promotion is increasing, making it easy for artists to resort to paying for their reposts.

It’s a trend we’re seeing with record labels too. As the importance of SoundCloud expands beyond electronic music, labels of all sizes are catching on to the importance of having their SoundCloud plays on point. Their marketing efforts are now also directed to SoundCloud, including repost trading and sometimes paid campaigns.

While the research methodology of this article was initially intended to address just paid repost marketing, the findings apply to reposting in general. We were shocked by the results, even as they affirmed the belief that we had already formed by intuition — that the value of reposts was being diluted.

It turns out that followers are not the best indicator for how many plays you can expect to get from a repost.

The value of a repost is directly linked to the nature and behavior of the reposting SoundCloud channel. How often they upload, repost and who their audience comprises of are all impacting factors.

As the SoundCloud trading atmosphere is like the Wild West, these findings can help you better choose your repost partners, as well as better estimate the value of a paid promotional offer.

For this research, we paired up with someone with experience in statistics and coding, as we needed to mine data from the SoundCloud API.

By day Tim works for a notable management consulting firm, where he crunches data to find where businesses can improve efficiency and save money. By night, he’s something that you can likely relate to: a music producer.

Tim reached out to us following a statement by Budi, who said that there isn’t a reason to pay for reposts as the market is “completely non-transparent” and that reposts can be acquired by networking with influencers. Tim took it upon himself to analyze the data and to estimate the real efficiency of paid SoundCloud promotion.

The research question that Tim set out to answer is one that many SoundClouders may have asked themselves at some point: “How efficient is paid SoundCloud promotion?”. The answer to this question would also have implications for traditional (non-paid) reposts, as the mechanics are identical in nature.

To answer this question, we had to pull a huge amount of data on individual tracks. Not just total plays and hearts, but detailed information such as plays gained from reposts, who reposted what tracks, and how many followers those channels had.

We were able to extract this from SoundCloud’s API, which is short for Application Programming Interface. This is what applications and websites such as Hype Machine and Artist Union use to access upload information and incorporate embeds from.

Tim wrote a script that crunched the numbers on 8.000 tracks reposted by a selection of SoundCloud (promotional) channels; stats like who reposted what track, how many followers the reposted channels had, how often the channel reposted, while also collecting the stated prices for reposts to include into his analysis.

To avoid outliers messing up the data, such as a #1 Hype Machine charting position or a track with several strong YouTube uploads (that would draw traffic back to the SoundCloud upload), we picked tracks with minimal outside exposure. We limited the age to less than two months old, as we assumed that after that period, the track would be at the end of its promotional cycle and any additional plays would be unlikely to result from active repost promotion.

The average price charged for a repost was about $0,30 per thousand followers. For example, a 50K follower channel might charge $15 for a repost. This is a realistic market price from what we’ve seen offered.

How we established the contribution of a repost by a specific SoundCloud channel to an upload, is best explained as follows. Let’s say channel X reposts one of your tracks, netting you 50 plays. Then, channels X and Y repost another track, leading to 150 plays and another track reposted by channels X and Z earned 250 plays. With some simple algebra you can find each channel’s direct contribution.

The findings are shocking. 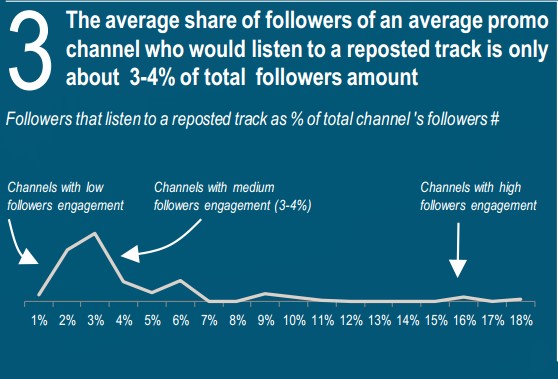 The average repost only generates plays equal to 3-4% of that channel’s following.

In other words, if a 100.000 follower channel reposted your track, it would probably only generate 3.000 – 4.000 plays. You, like us, had likely expected this number to be much higher.

At the 100.000 follower scale, 3-4% is not that bad, but in realizing that the majority of SoundCloud users have less than 1.000 followers, it becomes questionable whether all that time spent repost-trading is actually put to good use.

The bulk of channels had scarily low play-to-follower ratios, between 1-5%. Some were even as low as 1%, whereas a small portion of channels ranged between 10-18%. 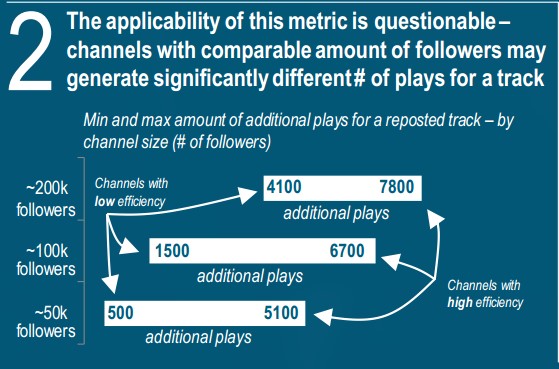 These varying play-to-follower ratios support our initial fear; that the value of reposts is diminishing.

A repost by a highly engaged 50.000 follower channel may do more for you than one from a poorly engaged 100.000 channel. The difference is significant, and reinforces the notion that you need to be careful in who you team up with.

The secret behind strong reposts

So why do labels and artists have higher engagement ratios?

Labels and artists tend to curate more when it comes to reposts and uploads, favouring quality over quantity, allowing them to develop dedicated superfans. The opposite is true of promotional channels, who prioritize quantity over quality in a pursuit for more followers and scaling their networks.

The result is a perpetuating cycle, where the increase in followers leads to more exposure (but not per se more plays). Also it creates an overlap of followers, which is common with SoundCloud networks that grow through daily repost and mutual gate-inclusion.

From a fan’s perspective the lack of engagement makes sense. If multiple channels repost the same song each day, you’re unlikely to click it. Eventually they end up ignoring the channels, or unfollowing them.

That’s not to say that all repost networks have poor engagement rates. The outliers are the ones that repost less frequently and upload more, acting more like labels.

The more a channel reposted per day, the less engaged their audience. Repost frequency had the strongest correlation to a channel’s play-to-follower ratio.

The graph illustrates it beautifully. Most channels that reposted fewer than 4 times maintained play-to-follower ratios as high as 15%. Audience engagement falls significantly at 5 daily reposts and beyond, with the bulk of the analyzed channels reposting between 6 and 17 times a day.

One can argue that artists are most cautious about what they repost, as they want to make sure they only repost material that resonates with their audience and is as good (or better) than what they’d make and upload themselves. They see the value in saving their audience and are rewarded by out-of-the-ordinary response whenever they do upload or repost something.

The biggest take-away is that you need to be careful not to exhaust your audience.

There’s a significant tipping point in engagement with reposts exceeding four a day, which everyone should take to heart as their daily limit.

Reposting more often to overcompensate for the lack of plays is actually counter-productive and decreases engagement further. There’s a lot more to be said for reposting 4 times a day consistently and optimizing for ideal repost (or upload) times, leaving ample time in between each repost.

One way to do this is by using SoundCloud repost scheduling tools, which we cover in-depth in the new edition of The SoundCloud Bible.

In respect to the paid-promotion market on SoundCloud, the average price charged by promotional channels isn’t far off from the results you can expect to get from their poorly engaged audiences.

As mentioned, the average price charged for a repost was $0,30 per thousand followers, whereas we found that the average cost per play was $0,013 USD.

An average repost channel with 50.000 followers might thus charge $15 USD for a repost, which at a 3% engagement ratio would lead to 1.500 plays. The average value of those plays is $19,50, meaning that you’d technically get more than you paid for.

The trick then, in maximizing results from paid promotion, is analyzing which channels have higher play-to-follower ratios, by looking at the frequency with which they repost and the quality of that music. Another optimization strategy could be to demand your paid repost is scheduled at that channel’s optimum engagement time, which is usually when the bulk of their audience has arrived at the office or school. For most electronic music promoters, the lion’s share of their audience is in the West Coast of the USA, for whom 10:00 AM PST would be perfect.

Now, truthfully, we have yet to experiment with paid SoundCloud promotion over at Heroic. We may attempt it at some point, just to see whether we could get a positive ROI, but as of now, we’re blessed to be working with a network of influential partners.

If you’re an artist with money to spend, it may be worth considering as a way to get your tracks early traction. Just make sure you scan your partners as carefully as you now (having read this article) will do for repost trades.

And don’t believe in the buy-in fallacy. Paying to getting your music heard is not required to succeed in today’s industry.

Want to learn more about SoundCloud? Check out The SoundCloud Bible. The Third Edition has just come out and includes over 400 pages on growing your audience, SoundCloud trading, copyright and monetizing your music on SoundCloud, YouTube and elsewhere.