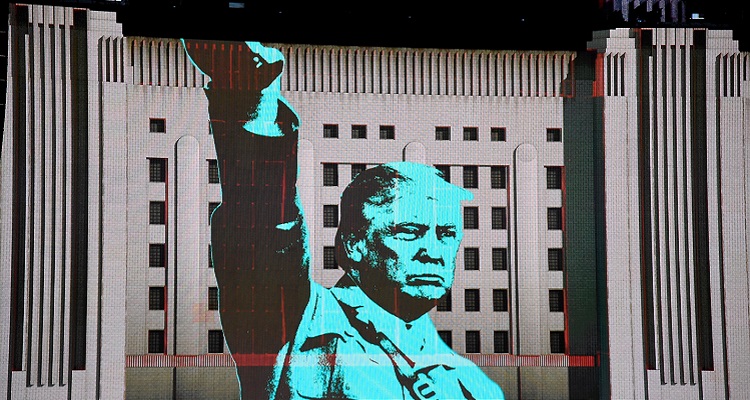 INDIO, CA – OCTOBER 09: An illustration of Donald Trump appears on the screen during Roger Waters performance at Desert Trip at The Empire Polo Club on October 9, 2016 in Indio, California. (Photo by Kevin Mazur/Getty Images for Desert Trip)

When it comes to Donald Trump, Just Say No.

30 Days, 30 Songs has appeared on the internet with supported from some big names in the music industry. It’s designed as a rallying call for all music lovers to vote against Republican presidential candidate, Donald Trump.

The website will feature a brand new song each day created by popular artists. Each song will be anti-Trump. The about page goes on a pretty lengthy rant against Trump.

“[Donald Trump] has shown the content of his character time and time again, and the very fact of his candidacy is a blight on the nation. His words incite hatred and celebrate inequity.“

The website is pretty straightforward when it comes to which presidential candidate they endorse.

“In contrast to Trump’s demagoguery and complete lack of qualifications and temperament, Hillary Clinton is a calm, intelligent, empathetic professional with more relevant experience — as First Lady, Senator, and Secretary of State — than any candidate in the modern era.”

30 Days 30 Songs is the brainchild of American writer, editor, and publisher Dave Eggers. He attended a Donald Trump rally in June, where he came up with the idea. According to Entertainment Weekly, he wanted to “resurrect the political song,” this time against Trump. Thus, 30 Days, 30 Songs was created. In 2012, Eggers launched a similar successful project for Obama’s second presidential re-election campaign. Eggers decided to call up artists who would write tracks for the project for the site’s playlist. In a statement, he said,

“From Woody Guthrie to Public Enemy, we know that songs can change minds, and particularly now, we need to motivate voters to stand against bigotry, sexism, hatred and ignorance.”

On Eggers’s site, you’ll find notes written for supports of Bernie Sanders, environmentalists, and feminists. There are also notes for Obama supporters, people who want transparency in the government, as well as Muslim and Mexican Americans.

The 30 Days, 30 Songs playlist launched today, 30 days before the November election, and a day after the second presidential debate. The first song on the list is Death Car for Cutie’s Million Dollar Loan. Artists who have contributed to the project include clipping., Bhi Biman Thao Nguyen, and R.E.M.. There are still other artists supporting the project who have not yet been publicly named. For those who want to check out the songs, the playlist is available on Spotify and Apple Music. You can also check out the first video below, which is a not-so-subtle nod to a statement made in first presidential debate.