My Abusive Relationship With Justin Bieber… 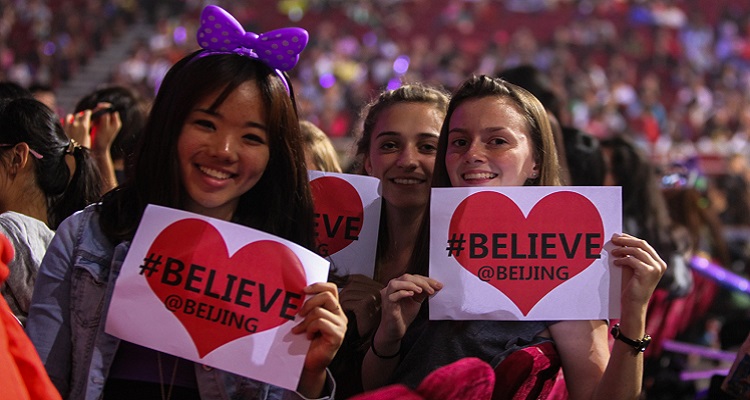 “This is not a gimmick, and I’m an artist, and I should be taken seriously.” Justin Bieber, May 2013.

Justin Bieber is known for a lot of things. His strange behavior, his off-stage antics, and even his treatment of fans. Last Sunday, he stormed off a recent gig in the United Kingdom. He reportedly said,

During the concert, he told fans,

Before dropping his microphone and walking off to boos from the large crowd, he added,

“I don’t think it’s necessary when I’m trying to say something and you guys are screaming.”

This wasn’t enough for Bieber. So he returned and then said,

“Obviously Manchester can’t handle me.  So I’m going to quit talking the rest of the night and just do the music…[I dedicate my] life to this, to performing, to traveling, to bringing smiles to people faces.  I feel like people are not giving me the same respect back and it hurts a bit.”

You can see the videos posted on Twitter below.

Here’s where Justin Bieber got boo’d tonight for asking fans to not scream and walked off stage ?#PurposeTourManchester pic.twitter.com/qEJzNZRfuv

NBA star Charles Barkley was an excellent basketball player back in the day. When questioned about his off-court antics, he uttered the following, classic line.

“I’m not paid to be a role model. I’m paid to wreak havoc on the basketball court.”

Bieber fans are known to be forgiving with the international pop icon. They tend to justify his actions. However, it’s well-known that Bieber has not treated them with the respect they deserve. His actions in Manchester are another sign of Bieber’s abusive relationship with fans.

In fact, they seem to model the signs of an emotionally abusive person.  The patterns are all there.

Take a look at the following line from Live Bold and Bloom.

“So what is emotional abuse? It involves a regular pattern of verbal offense, threatening, bullying, and constant criticism, as well as more subtle tactics like intimidation, shaming and manipulation. Emotional abuse is used to control and subjugate the other person, and quite often it occurs because the abuser has childhood wounds and insecurities they haven’t dealt with — perhaps as a result of being abused themselves.”

Sign #1: They humiliate you, put you down, or make fun of you in front of other people.

Justin Bieber put down his fans in a jam-packed Manchester Arena. He scolded them. He told them to stop screaming and give him respect. They didn’t, of course. He then walked off-stage. However, this isn’t the first time that Bieber has demeaned his fans’ needs.

During his Purpose World Tour show in Atlantic City last July, a die-hard Bieber fan threw a hat on stage as a gift for the singer. He wasn’t happy. He immediately threw the hat back, and said on-stage,

“The reason why it’s called the Purpose tour is because I feel like everybody in this building has a purpose,” he said. “And though it’s not often that you speak about what your purpose may be or your friend’s purpose…and if we could take this moment to listen and try not to give me a hat or whatever you’re trying to throw on stage right now because I probably don’t want that [expletive].”

Bieber was quick to realize his mistake, however. He then said, “Sorry, that was mean,” before laughing into the microphone.

“Sorry for throwing your hat, but you ruined the moment.”

Sign #2: They regularly demean or disregard your opinions, ideas, suggestions, or needs.

Let’s face it: Being a world-famous pop star is a difficult life. You have to deal with fans constantly asking for your autographs, selfies with them, and more. It might be a huge drag. Yet, not all international pop stars feel the same way. Taylor Swift spoke with BBC Radio 1’s Nick Grimshaw last year. She said the following,

“That’s the best part of this. When you walk off stage and you’re drenched in sweat and you’re tired and your legs hurt… It feels like you’re really working for the job. It’s nice to feel tired after a show. I’m like ‘Oh my God, I’m finally doing something.’ I really like the feeling of: ‘You know what? I’ve been busy. I deserve this watching two hours of TV at the end of the night.”

Last May, Justin wasn’t in the mood to take photos. Some overly-excited Beliebers saw their icon rolling in a big, black SUV. They did what any devoted fan would do: they pleaded with him for a selfie. When a fan reportedly threw a flag, he simply asked, “Why’d you do that?” He tossed the flag back to his fans and gave them an “icy, cold look.” He then put the window up and completely ignored fans.

Now, how does this fit into the second sign? The singer is actually actively ignoring fans’ needs.

According to Dr. John Lucas, a clinical assistant psychology professor at Weill Cornell Medical College, celebrity worship isn’t new. It’s existed since the dawn of humankind. Celebrities tap straight into people’s primal fantasies and basic emotions, making them believe that anything is possible. Usually, most religions fill this need in society. However, as religion falters, a sense of yearning in people grows. Bieber conveys a sense of immorality and invincibility.

“What we know of them [celebrities] through People magazine and other media sources fills a gaping and painful void in our lives.”

Jeff Rudski, a psychologist at Muhlenberg College, qualifies super-fandom as a sign of a deeper problem.

“Engagement in a devotee world isn’t inherently harmful. But for some, the object of devotion begins to substitute for other rewards in life.

For fanatics, liking may trigger an unusually high degree of wanting.”

Samantha Smithstein, co-founder of the Pathways Institute for Impulse Control believes that super-fandom is actually a coping strategy.

“Fanatics may be driven to escape an issue that’s difficult to face.”

To Beliebers, whatever Bieber does or doesn’t do hits them personally. They feel loved by the singer, feeding their sense of isolation. Thus, when Bieber ignores them, like he did in his SUV, the isolation is further strengthened.

Even worse for fans who crave the singer’s attention, Bieber posted on his Instagram earlier this year,

“I realize people will be disappointed but I don’t owe anybody a picture.”

Sign #3: They use sarcasm or “teasing” to put you down or make you feel bad about yourself.

A die-hard Belieber posted a hand drawing of the singer on Instagram, particularly where he’s licking a knife. Bieber simply wrote,

Fans called this comment merely harmless. After all, the singer was just laughing at a picture of himself. Not everyone believed it, though. Take a look at the following replies.

“Look I’m not a fan and I’m not a hater this is just my opinion. This is rude and you should probably delete it before it blows up.”

“Shame on you @justinbieber.”

“SHE DIDNT DRAW THIS AS A JOKE!! THE GIRL WHO MADE THIS IS SERIOUS, SHE’S SAD RN.”

So, was Justin Bieber mocking the artist, or the picture of himself? It’s difficult to say. This isn’t the first time the singer has openly mocked fans. Earlier this year, Justin Bieber sported dreaded hair on his Instagram. His Instagram had 65.7 million followers before deleting it. The picture was mocked by anti-Bieber fans. The singer then posted a video and wrote,

In the video, the singer mocked his critics along with surfers in his best surfer-dude impression.

“Dude, are you gonna do anything with your hair or you just gonna leave it like that, dude?”

In 2013, Justin Bieber spat on fans, then denied he did it, accusing TMZ of superimposing the spit in the pictures.

What’s worse, try offending an entire country of fans. Let’s go back to the black SUV incident. One Argentinian fan gave the singer the national flag of Argentina. In response, Bieber threw the flag out of the car and mouthed “go away” to fans.

Sign #4: They correct or chastise you for your behavior.

In a concert in Norway, the singer reportedly said “You guys suck,” before walking on without looking at fans. The crowd groaned in disappointment after hearing the words. A video was posted on Vine. The caption captioned the video after the phrase and wrote,

“I’m [expletive] disgusted. Can’t wait for him to leave Norway tbh, so glad I chose not to see him.”

Bieber fans defended the singer, insisting that he didn’t say “You guys suck.” Rather, the singer said, “Can you guys stop?” Other fans say that the singer was joking.

During a small gig in Spain, Bieber stopped the music and told fans to “at least” clap according to the rhythm.

“Come on, guys. It’s like this. If you’re going to clap, at least clap on-beat.”

“In no way did I mean to come across mean, but chose to end the show as the people in the front row would not listen. Hopefully people will understand where I am coming from. I don’t always handle things the right way but I’m human and I’m working on getting better at responding not reacting.”

Sign #5: They try to control the finances and how you spend money.

Justin Bieber fans have paid excessive amount of cash just to meet the singer in person. But how’s this for love?

Bieber’s Purpose World Tour included a costly VIP package for diehard fans. If you wanted to meet and then greet the singer, it set you back $2,000. A group photo ran about $925.

Did you pay for $2,000 for a meet-and-greet? Did the singer cancel on you? You only got a $500 partial refund IF you kept the ticket. Very few got a full refund.

Beliebers defended the singer’s decision. One fan tweeted the following,

It’s been only 2 weeks and he’s drained. We can wait, his emotional stability can’t. #cancelPurposeTour

This still doesn’t explain how Bieber fans only received a partial refund, though.  If you wanted a full refund, you had to give up the show ticket and not attend the show.