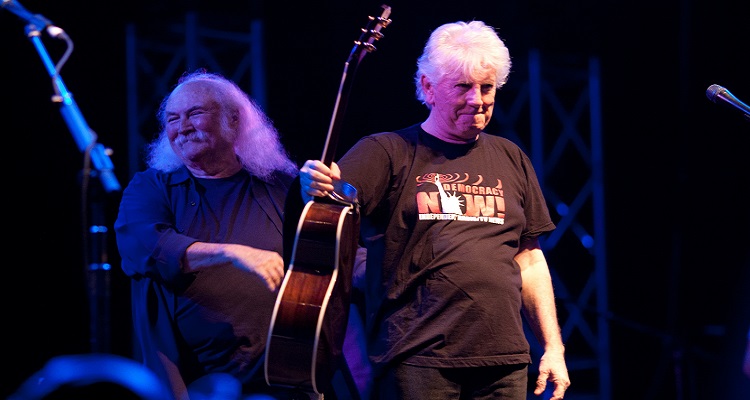 Kanye West likes to exalt himself.  Last year, he declared himself to be “the greatest living rock star.” These comments caused an immediate backlash on social media.  Slipknot said in an interview with the BBC that he really isn’t.

David Crosby, however, went a step further. He responded in a tweet,

“as I said ..he can’t write, sing, or play At all He is an egomaniac He is dumb as a post He creates nothing Helps no one”

In an interview on Wednesday with Andy Cohen on Watch What Happens Live, Crosby brushed off his fighting gloves again. He said this:

“I’m saying unlike Kanye West…who can neither sing nor dance nor play.”

Crosby didn’t give a clear answer when Cohen asked if Kanye can write, but he did follow-up, saying,

“Yeah, that one’s iffy.  He certainly can’t play anything and he certainly doesn’t sing.  I mean, the thing that bugs me about him is the ‘I’m the world’s greatest rock star.’ Somebody should drive him over to Stevie Wonder’s house… right now so that he understands what a real one is.  Secondly, they should send him all of Ray Charles’s catalog so that he can learn how to sing.”

Crosby has dealt with his shares of troubles in the past. He spent time in a Texas state prison in 1982 due to possession of drugs like cocaine and heroin, along with weapons offenses. He also drank under the influence in 1985 and was arrested for a hit-and-run accident. Earlier this year, Graham Nash told a Dutch magazine,

“I don’t like David Crosby right now. He’s been awful for me the last two years, just [expletive] awful. I’ve been there and saved his [expletive] for 45 years, and he treated me like [expletive]. You can’t do that to me. You can do it for a day or so, until I think you’re going to come around. When it goes on longer, and I keep getting nasty emails from him, I’m done. [Expletive]. David has ripped the heart out of Crosby, Stills, Nash and Young

You can see the interview with Crosby and Cohen below.