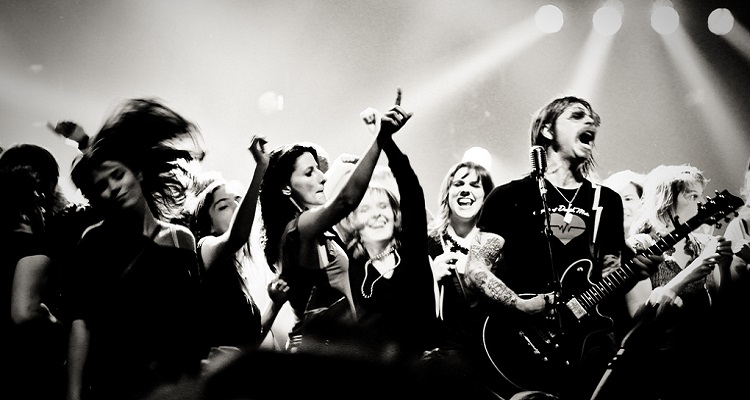 How can you describe one of the worst nights in history?  The Eagles of Death Metal and HBO are now planning a documentary that could be difficult to watch.

On November 13, 2015, almost a year ago today, Eagles of Death Metal was playing a sold-out concert to 1,500 guests at Le Bataclan theatre in Paris.  When the band started to perform Kiss the Devil at approximately 9:40 p.m., multiple terrorists with AKM assault rifles entered the hall.

The rest is bloody history.  A violent massacre and hostage-taking ensued, with attackers shooting randomly into the crowd, including those seeking cover.   After 20 minutes, the attack ended.  89 people died.  Two attackers detonated their suicide vests.  Police shot and killed the third gunman whose suicide vest detonated.

But how did they get in so easily?  Eagles of Death Metal frontman Jessie Hughes alleged an inside job.  He question whether the West has been coddling Islamic extremism.  He was banned from certain festivals and performances, and ultimately apologized.

But what do Hughes and the band really think about the attacks?  Several days ago, Eagles of Death Metal announced that Colin Hanks will direct a documentary that will re-examine those and other issues.

The documentary is called Eagles of Death Metal: Nos Amis (Our Friends) and will air exclusively on HBO in February. According to Entertainment Weekly, the film tracks the band’s experience before and after November 13the.  In addition, the documentary will look at the close relationship between singer Jesse Hughes and his childhood friend, co-founder, and drummer Josh Homme.

With the documentary, Hanks wants to address the following question.

“How do you go on with your life with something like that?”

Colin Hanks has been friends with the band since 2015’s All Things Must Pass: The Rise and Fall of Tower Records.  Hanks’s goal for the film is to “document the band and their fans to try and make something positive from something truly unfathomable,” according to a statement released by HBO.

The documentary has three main parts: an introduction of the band and its music, a detailing of the 2015 attack, and the band’s return to Paris three months after the attack.  The return was part of a healing process.

And Hanks said that the film won’t avoid the controversy that some of Bataclan’s staff were in on the attack.

Jessie Hughes spoke with Vice magazine after the attack.  “I cannot wait to get back to Paris. I cannot wait to play…[We] want to be the first band that plays the Bataclan when it opens back up because I was there when it went silent for a minute,” Huges said.

“Our friends went there to see rock ‘n’ roll and died. I want to go back there and live.”

U2’s Bono and the Edge will also appear in the documentary. They invited the band to play in Paris and perform with them.