A Defiant Eagles of Death Metal Return to Paris 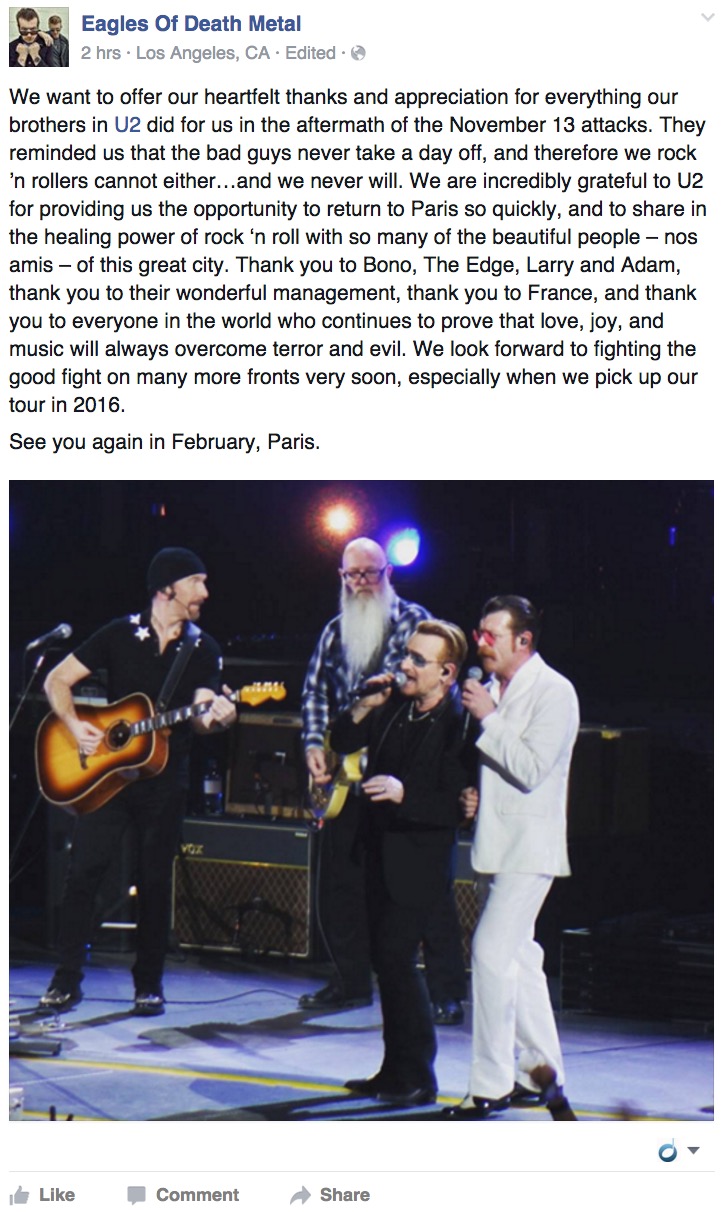 Just three weeks after the hideous attacks by Islamic extremists in Paris, the band at the center of it all — Eagles of Death Metal — returned to Paris in a defiant manner.  The group played alongside Bono and U2, a group whose original shows were quickly canceled in the wake of the attacks.

U2 has remained determined to reschedule those shows ever since, and performances on Sunday and Monday night may have been the soonest logistically possible.

Bono, whose ‘save the world’ egomania is typically preposterous, this time offered a proud face of resilience to an angry and scarred city.  “There’s nothing left but to introduce you to some people whose lives will forever be a part of the life of Paris,” Bono told the crowd before bringing on the Eagles of Death Metal. “These are our brothers. They were robbed of their stage three weeks ago, and we would like to offer them ours tonight.”

The show happened just miles from the Bataclan at the AccorHotels Arena, where other celebrities including Patti Smith joined the united front.  U2’s back-to-back shows were originally scheduled for November 14th and 15th, one day after the November 13th attacks, though a show of that magnitude was swiftly scuttled as a state of emergency consumed the city.  During that week, most were overwhelmed with shock and retaliation, with French special forces raiding terrorist hideouts throughout Paris and dragging suspects into custody.

The performance offers a proud and defiant front that was notably absent in the days following the attacks.  In the fraught moments following the ISIS-led massacre, mega-artists like Prince, Foo Fighters, Deftones, Motörhead — and, U2 — all canceled their European shows, sometimes under the direction of authorities.  Bob Dylan, one of America’s most-prized exports, continued his European trek in Italy but demanded heavy security at his gigs. 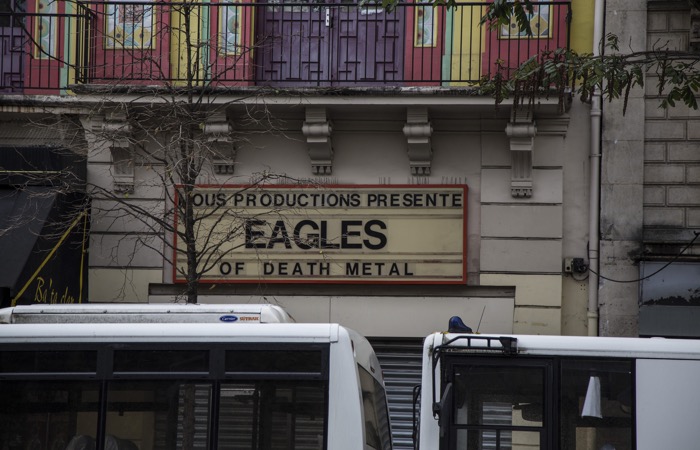 Eagles of Death Metal, a group under serious risk for post-traumatic disorders, could shift those decisions, despite huge and obvious risks.  “I cannot wait to get back to Paris,” Eagles of Death Metal lead singer Jesse Hughes told Vice in their first post-Bataclan interview.  “I cannot wait to play. I want to come back. I want to be the first band to play in the Bataclan when it comes back up.  Because I was there when it went silent for a minute.  Our friends went there to see rock ’n’ roll and died.

“I want to go back there and live.”