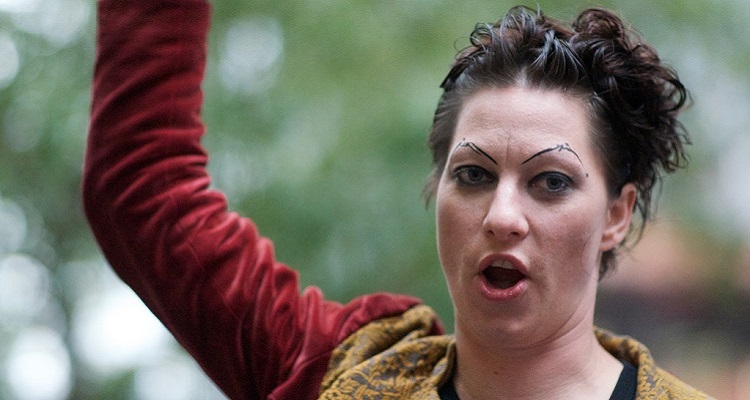 American singer-songwriter Amanda Palmer has called the past few months in the States a “total sh—t show.” However, she’s incredibly optimistic about Donald Trump’s upcoming presidency.

She spoke at a press conference during Woodford Folk festival in rural Queensland. She first announced that Australia granted her and her husband, writer Neil Gaiman, granted five-year working visas.

“Being an optimist … there is this part of me – especially having studied Weimar Germany extensively – I’m like, ‘This is our moment.’ Donald Trump is going to make punk rock great again. We’re all going to crawl down staircases into basements and speakeasies and make amazing satirically political art.”

The Guardian stated that The Dresden Doll, solo artist, and cult cabaret icon invoked “the flourishing art and culture in Weimar Germany.” According to her, this art style is proof that “frightening political climates make for really good, real, authentic art.”

She expects the political climate in the United States to become ugly. Thus, instead of fighting vocally or politically, art will answer.

“If the political climate keeps getting uglier, the art will have to answer. We will have to fight. It’s already happening – the artists in my tribes have been like, ‘Alright. This is not good.’ We are sharpening our knives for a large buffet.”

Palmer is currently touring Australia on a stripped-back acoustic tour. She’s celebrating both her and husband’s Australian talent visas, and their first child, Anthony.

“We started this [visa application] process long before the spectre of Donald Trump, before his orange head was even a speck on the horizon of our lives.

“We have a brand new baby, who’s a year old, and I’ve been looking around at the world, the political climate, the art scenes, my friends, our whole situation, trying to figure out where we should land. And Australia does look pretty tasty.”

While Palmer believes a Donald Trump presidency will boost art, that doesn’t mean that the singer supports him. She won’t attend his presidential inauguration.

“I actually feel quite guilty that I’m not going to be in the States on January 20. I feel like I really should be there in Washington with the millions of other women who are going to give the giant finger to the orange man. But I’ll do what I can from over here.”