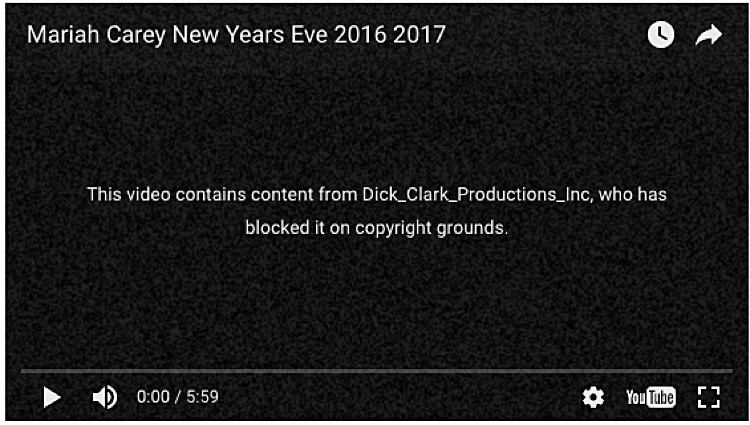 Looks like Mariah Carey is taking some drastic steps following her disastrous New Years performance.  That includes ‘deleting the internet’ of the video…

As Mariah Carey’s entire career goes onto life-support, there’s a new survival strategy: delete the internet.  Just this morning, Mariah Carey and Dick Clark Productions started ripping down a number of YouTube videos showing the flop.  The video pictured above, posted immediately after the performance, was viewed millions of times before getting ripped down.

Previously, Mariah Carey and her manager blasted Dick Clark Productions for intentionally screwing up her performance.  Now, it looks like both camps are trying to scrub the infamous clip from the interwebs.

Not only are more copies popping up, but some of the original versions are still floating around.  Like this one on YouTube, which has already gained 800,000 views (and counting).  But that’s just one sliver of the ogling masses.  Indeed, this one is just too fat-n-juicy to kill.

(of course, this might be deleted by the time you read this…)

Already, waste product is hitting the fan.  According to details shared this morning, Mariah Carey has already axed her creative director.  Other brutal firings could be next, with supplicants clinging to their jobs under Queen Carey.

But the bigger bloodshed is happening with Dick Clark Productions, with Carey declaring all-out war.  Already, Mariah Carey’s manager said Dick Clark botched the entire performance with faulty mics, non-existent monitors, and other snags.  Then, Carey accused the company of deliberately sabotaging the singer for ratings.

Ruthless and dirty accusations!  “She was not ‘winging’ this moment and took it very seriously,” Mariah Carey rep Nicole Perna told Billboard. “A shame that production set her up to fail.”

That generated a sharp response from Dick Clark Productions.  The company quickly blasted the singer for failing to practice and prepare for the event.  Taking things a step further, the company labeled the accusations as ‘defamatory,’ which is often paired with another word: ‘lawsuit‘.

Of course, the video itself continues to proliferate, with uploads, downloads, and even parodies popping up everywhere.  Like this one from the Santa Antonio Spurs’ mascot.