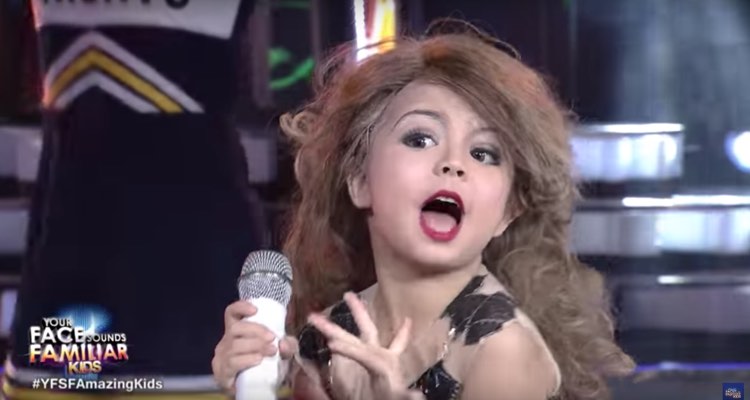 The latest viral video is cute, but it’s also extremely controversial.  Enter ‘Xia Vigor,’ which is somehow the name of a 7 year-old who performed a Taylor Swift song on Filipino national television this weekend.  Vigor took the cake with her performance on ‘Your Face Sounds Familiar Kids,’ a show in the Philippines that features pop covers by young kids.

In her 15 minutes of fame, Xia Vigor belts out her rendition of ‘You Belong to Me’ while prancing across the stage.  At one stage, Xia is stripped of her gown to reveal something skimpier.

Still so cute?  This is where the heated arguments begin.

As of this morning, Xia Vigor’s cover is blowing up on YouTube with 1.6 million views.  That will probably cross a few more million by the end of the day.  Take a look.

‘She just lost her childhood…’

As you’d expect, reactions on this are quite mixed.  Publications like Billboard, US Weekly, and Fox News gushed over how cute the video is, and certainly the show’s hosts are adoring.  There will only ever be one Taylor Swift,” Billboard declared.  “But it turns there is a miniature model with all the hair-flicks, turns and winks of the real deal.”

Others are less enthusiastic.  And critics are blasting the parents for outright child exploitation.  “Am I the only one that thinks this is wrong?” one YouTube commenter questioned.

There’s another uncomfortable question.  Is this child being over-sexualized in a horrible way?  That’s the take of Kitty Vandiver, who felt the entire ‘strip tease’ element went way too far.  “How is this less exploitative than a child pageant?” Vandiver questioned.  “Let kids be kids and not hypersexual circus seals. smh”

Others defended the video, while pointing to endless child pageants, child actors, and the like.  Then there’s the question of whether this is fine by Filipino standards, a defense of many viewers.  “There’s a HUGE difference when it comes to how we treat children here in the Philippines,” one viewer rebutted.  “Growing up, entertaining through dance and music has become a huge part of our culture. These kids are having fun sharing their talents! It’s actually just you and other people from halfway around the globe who happen to SEXUALIZE everything.”

“So before you share your sentiments about these kids, make sure you know and understand our culture.”