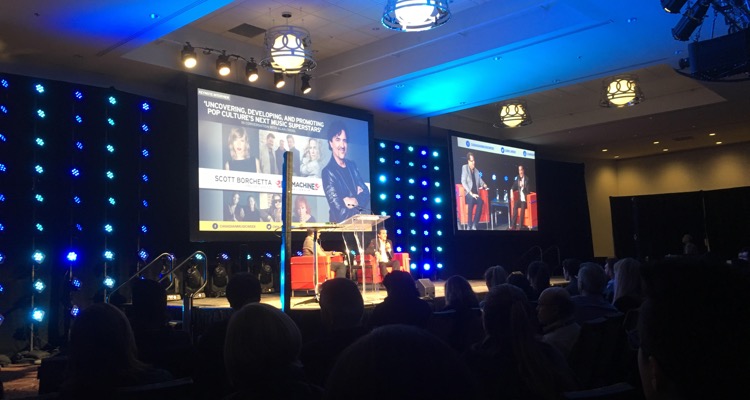 Spotify is great for superstars like Drake and Ed Sheeran.  But according to the head of Taylor Swift’s label, Scott Borchetta, the numbers are tricky — and it’s not trickling down for most artists.

Taylor Swift is notorious for bashing Spotify.  Aside from withholding her music from the platform, Swift has openly blasted the company’s business model as a “startup with no cash flow” with the behavior of a “corporate machine”.

Amazingly, the head of Taylor Swift’s label Big Machine Records — Scott Borchetta — is relatively tame in comparison.  But he’s definitely tough on streaming and probably a major reason why the company has agreed to limit some content of premium-only subscribers.

At Canadian Music Week this morning, Borchetta talked a lot more about streaming music and whether it can make sense for artists, labels, and other groups like producers and songwriters.  But he also popped the bubble on streaming’s success so far.

Alan Cross (Interviewer): “Let’s talk about Spotify.  Streaming music is here to stay, I think we have seen that all the major labels are experiencing more revenue from streaming than they are from physical sales now —”

Scott Borchetta: “So let’s pause right there.  Because that’s not true, yet.”

Borchetta: “So there are a couple of artists who are completely over-performing right now.  So if you look at how amazing Drake is doing on streaming.  The Weekend, Ed Sheeran, etc.  Those [artists] are so far ahead of the rest of the industry — so, when you say ‘album equivalent’ — ‘streaming equivalent album,’ ‘track equivalent album.’  Does everyone know what a ‘streaming equivalent’ is?  If you don’t raise your hand [smattering of hands raised].

“Okay, so, basically it says that 1,500 spins is equal to one album, right?  So, because it’s a sliding scale on the rates, we’re not getting paid the same amount.

“So as far as the ones that are super-performing, Drake and Ed and they’re doing really well.  The rest of the world will catch up.

“Ya know, in Nashville, where I’ve been all over Apple and Spotify and Amazon about is — the battle of Nashville has not even started yet.   So get down there and start investing.  Because when middle America catches up with streaming, then there will be the coming revolution.

“But let’s not forget, Spotify isn’t profitable yet.”

“So I think we should be really specific and careful, and make sure — because I agree with you 100%.  The genie is out of the bottle and she’s not going back in.  So we have got to make premium subscription services work, period, the end.  But that means we need a healthy Spotify.

“So streaming absolutely is the future, but let’s not forget — and you know I literally wear it on my sleeve as you see there and see right here.  Music has value.  I find that anything that we pay for we value more.

“So I think that everybody should be on a premium service of some sort.”