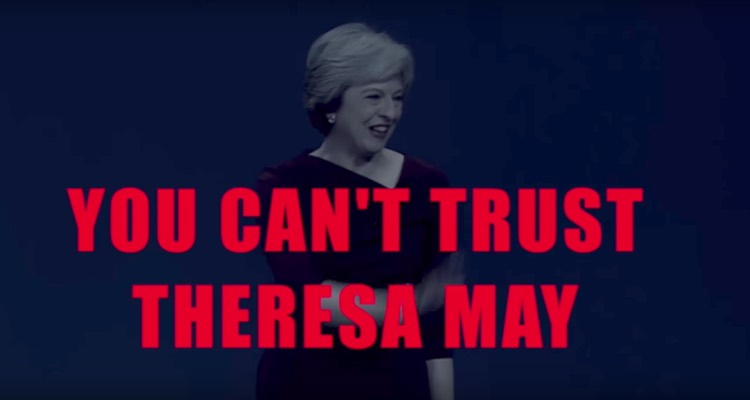 Screenshot from the anti-Theresa May video, ‘Liar Liar GE2017’

BBC Radio insists that it isn’t a ban.  But despite hitting #1, ‘Liar Liar GE2017’ is being blocked from BBC’s airwaves.

*Updated, June 1, 10:30 am PT: We initially wrote that this was the first chart-topping track to be kept off of BBC and British airwaves.  Since that point, readers have pointed us to at least two different examples of banned chart-toppers: ‘Give Ireland Back to the Irish’ by Paul McCartney and ‘God Save the Queen’ by the Sex Pistols (see comment below).

Guess the revolution won’t be broadcast, after all.

Despite soaring to the top of multiple digital charts, BBC Radio is refusing to play an anti-Theresa May protest song.  Other British radio networks like Capital FM are also banning the track.

The song, ‘Liar Liar GE2017’ by Captain SKA, is a blatant slam of May’s policies.  Among other criticisms, the track sharply blasts the politician as a ‘liar’ who ‘can’t be trusted’.

Here’s the oft-repeated chorus of the song:

You can’t trust her

And, here’s a sample of the lyrics:

“I want to have government that

doesn’t think that fascism is where it’s at

Because putting the Mother of All Bombs

I’m hoping for a future for my child

Where she can grow and feel inspired

Do everything in your power you can

People rising up is the only plan”

All of which is clearly resonating with the populace.  Earlier this week, the track soared to number one on the UK iTunes download chart.  Meanwhile, the track itself has more than 1.33 million views on YouTube.

Sounds pretty popular, yet BBC Radio has decided to ban the track ahead of the general election.

Or, whatever BBC is calling this. “We do not ban songs or artists,” the BBC spun.  “However our editorial guidelines require us to remain impartial and the UK is currently in an election period so we will not be playing the song.”

Over at Capital FM, the song is glaringly absent from the Big Top 40 Show on Capital FM.  That is, despite ‘Liar Liar GE 2017’ hitting number 1.

Back in the day, that type of ban meant something.  Radio was powerful, and few would hear a song that wasn’t on the airwaves.  Now, it’s probably fueling the track’s popularity.  “The success of this song shows people are fed up with this government of the rich, for the rich,” Captain SKA stated.  “We’re overwhelmed with the support and our message is that people do have the power to change society if we act together.”

Captain SKA is actually a group of London session musicians headed by Jake Painter.  The People’s Assembly Against Austerity is backing the release.

And here’s the song itself.