If the Midterm Elections Happened Tomorrow, Kid Rock Would Be a US Senator 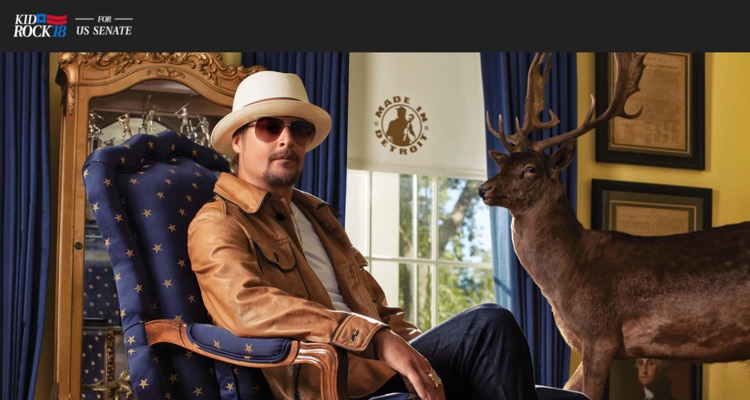 Kid Rock looks dead serious about running for a US Senate seat in Michigan.  And here’s the craziest part: somebody conducted a poll that gives him a pretty solid chance of winning it all.

If Donald Trump can win Michigan, why can’t Kid Rock?  Actually, Kid Rock would become the next United States Senator from Michigan if midterm elections were held tomorrow, according to a just-released poll.

Assuming Rock officially enters the race, he will face Democratic incumbent Debbie Stabenow.  This is all theoretical at this stage, since Kid Rock needs to formally initiate campaign paperwork (and start a campaign).  But pollsters at Delphi Analytica decided to see what would happen if people were asked about a race between the two.

The result?  Rock would win by 4 percent.

Specifically, Rock — whose real name is Robert James Ritchie — grabbed 30 percent of prospective voters.  Stabenow finished with 26 percent.  In total, 668 Michigan residents were interviewed between the dates of July 14th and 18th.  Turns out that’s enough to comprise a representative sample.

And what about the remaining 44 percent?

Well, that’s the wildcard.  According to the poll, those people remain completely undecided.  And, probably a bit disaffected by the choices presented.  In the end, they might simply abstain from an election featuring the two candidates.

That of course puts Delphi’s results in question, at least the part that concludes that Kid Rock would triumph.  Indeed, the poll assumes that only two candidates are running, and reveals a dramatically large number of people who are hesitant about having Kid Rock in office.  Exactly how that translates into an actual election is now the million-dollar question.

As for the seriousness of Kid Rock’s campaign, all signs point to a real candidacy.  Rock announced his intentions on July 12th, and posted this manifesto a few days later.  He’s even started a website dedicated to the run. 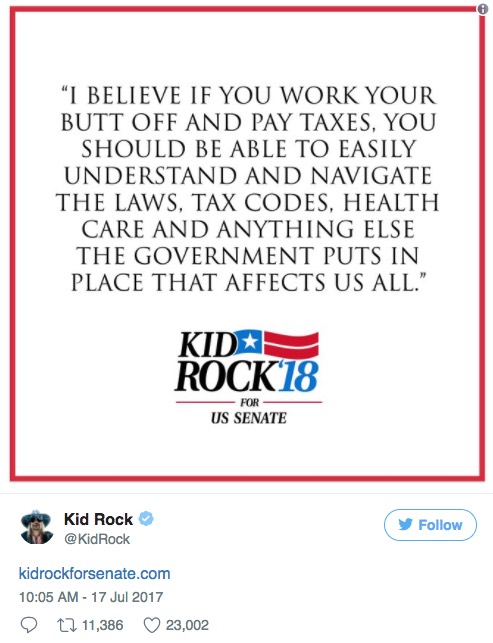 That certainly sounds like a campaign against ‘big government,’ and a ‘drain the swamp’ type approach that worked for Donald Trump.  Indeed, Rock staunchly stumped for the Donald, and strongly drew a connection between Trump and his own brash, irreverent persona.

Of course, that style also connected with enough Michigan residents to swing the state towards Trump, a massive — and almost unthinkable — upset in the traditionally Democratic state.

But Rock’s near-worshipping of Trump could prove a serious asset.  Or, a major liability depending on where things stand next year.  And for Kid Rock, separating from Trump is probably impossible at this stage.  Indeed, Rock didn’t just support Trump’s election, he hitched his entire persona to the man.  In the moments after Trump’s victory, Rock created Trump-themed merchandise, all infused with brash, sexist, ‘I Don’t Give a F—k’ rhetoric that has done wonders for the singer’s career.

And the similarities between these two men don’t end there.

Like Trump, Ritchie comes from a wealthy background, and both are squarely targeting middle American, largely white voters.  Rock is also pretty blatantly sexist and arguably racist, with a past penchant for draping Confederate flags (to his credit, Rock did support Ben Carson and has an African-American son).

Whether that Trump-fueled yelling resonates with enough Michigan residents is unclear.  But one thing’s for certain: Stabenow is already girding for a fight.  “I concede he is better at playing the guitar and I’ll keep doing what I do best, which is fighting for Michigan,” Stabenow offered in a statement.

Rock rifled right back, signaling a war-of-words ahead.

“I concede she is better at playing politics than I am so I’ll keep doing what I do best, which is being a voice for tax paying, hardworking AMERICANS and letting politicians like her know that We the People are sick and tired of their bull—-!”

Meanwhile, some questions surround Rock’s actual intentions to run.  So far, official paperwork hasn’t been filed.  But in a classic Trump-style retort, Ritchie has blasted the media for exaggerating a non-issue.  “I’ve got 15 days from my announcement to file paperwork with the FEC!” the singer ranted this week.

“Once again the press is wrong.”

Actually, the reality on Federal Election Commission filings is a little more complicated than that.  Technically, filing rules require a candidate to file 15 days after spending a minimum of $5,000 on a campaign.  Whether Rock has already gone through that amount is unclear, though the singer didn’t get into the specifics during his anti-media Twitter rage.