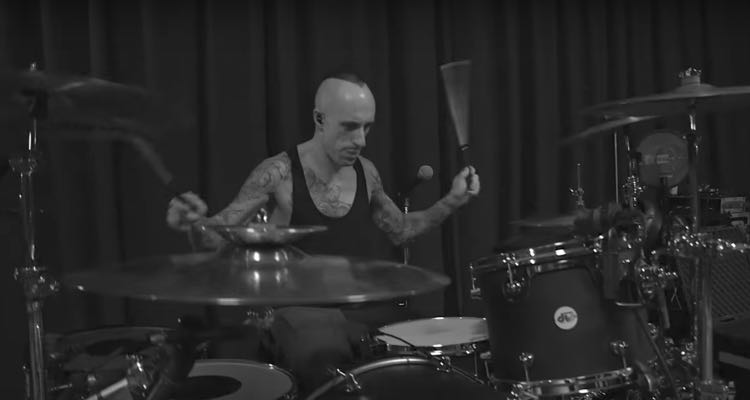 It’s rare you get to meet someone that is arguably the best at what they do. Frank Zummo is one of those people.

I get it. You believe there’s a better drummer and that may be true but god dammit Frank Zummo is good. From winning competitions at Drum Center as a CHILD, to starting the Street Drum Corp, to filling in for Tommy Lee, to joining Sum 41, to being voted drummer of the year by Alternative Press, he’s had a good run. Some would say great. Most likely better than your drumming career… I’m just saying…

Recently I had the opportunity to sit down with him and learn the ways of those that beat on things with sticks. And while you may not be a drummer there is certainly something everyone can glean from listening to a dude this dedicated. Here are the conclusions I drew from our conversation.

Frank decided he wanted to be a drummer at the ripe old age of 8 after seeing Motley Crue live in New Jersey. I don’t blame him, Tommy Lee is a charismatic dude. Most drummers wait to find the perfect band, not Frank. In his early teens he decided that since drumming was the only job he ever wanted, it would be necessary to learn as many styles as possible. From Afro Cuban to orchestral instruments, to wedding standards, to jazz and punk, Frank strived for competency in everything.

It worked. Frank left high school early to join a cover band and never looked back.

Networking is obviously important but only if it’s done tastefully. Frank stressed the need to build friendships and network subtly as opposed to throwing yourself out there. For example, identify what part of your social circle is trying to do interesting things and surround yourself with them. Leave the business cards at home.

Becoming friends with Tommy Lee was something that developed naturally for Frank. He didn’t do it to get something but eventually it led to a break in his career. People want to help their talented friends. People do not want to help strangers that clearly want something.

It’s trite but true. After fan favorite Steve Jocz left Sum 41 Frank got the job.  Rather than treat him as a touring musician the band made Zummo a permanent member.  Although this is an incredibly kind thing to do it put Frank in a difficult position. How do you fill in for the most popular member of a popular band? Do things your own way. Steve was known for his humor and offstage antics but that’s not Frank. Rather than try and fill that void Frank focused on being the best drummer possible and eventually won over the most stubborn Sum 41 fans.

Don’t wait for the right band, start one yourself.

After grinding it out for years in NYC Frank’s band was destroyed by their lead singers substance abuse. Shortly thereafter Frank joined a promising band in Los Angeles. A band that seemingly had everything going for it including money, management, and a label, until it all went kaput. Rather than wait around for another lead singer to decide his fate Frank started a band just for drummers called Street Drum Corp.

In less than a year Frank had franchised the act to theme parks and county fairs across the nation. It became so successful that he was asked to perform on a USO tour and had a residency in vegas. All of this because Frank, “didn’t want to wait on a guitarist or lead singer to write another song.”

Be Humble. Play where you can.

Sorry to break this to you but the odds of joining a rich indie band are low. The odds of playing drums at a theme park are higher yet admittedly less glamorous. But it pays and isn’t that kind of the point? By managing his ego Frank was able to make drumming his source of income before many of his peers. County fair? Fuck it, let’s do it. Six Flags? Absolutely. Joining a popular band was a goal but drumming for a living was the dream.

+ One of the Best Drummers of All Time Has Passed Away

He’s not, “money over everything”, he’s just pragmatic to pursuing music. It’s not about changing the world with an album, it’s about being happy with the life of a drummer and that happens to involve paying your bills. And as someone that’s seen countless bands struggle with money I believe Frank approaches the job in an intelligent and sustainable fashion. Stay focused. Practice drums.

Learn more from Frank on the Sugar High Podcast.