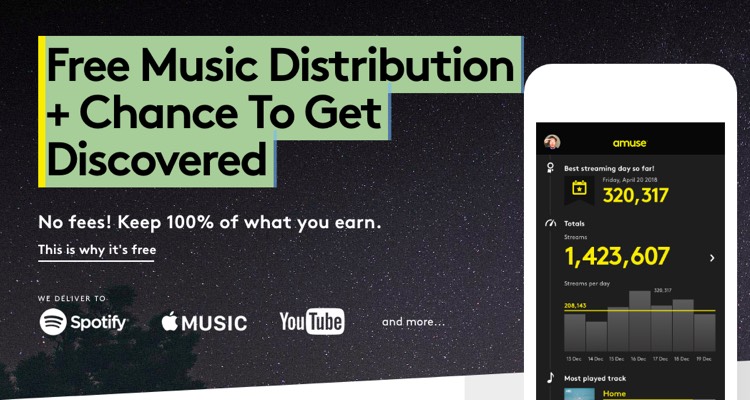 Amuse is a reimagined record label that just raised $15.5 million in Series A financing.  And they’re offering every single artist free distribution — plus analytics.

The record label survived the great cataclysmic shift from analog to digital.  In fact, the ‘big three’ major labels are now thriving, while enjoying the huge growth surge.

But what will the future ‘record label’ look like — if it’s even called that in the future?

A lot of ambitious upstarts are reimagining what the label will look like in 5, 10, or 15 years from now.  And it might include a blend of smart distribution, analytics, and ‘big data’ A&R.

Accordingly, Swedish startup Amuse (amuse.io) has just raised $15.5 million to test a concept involving some of those elements.  Along the way, they might create some serious changes in traditional music distribution, as well.

Actually, Amuse bills itself as ‘the world’s first mobile record company,’ and there’s a heavy emphasis on app-based functionality.  The idea was hatched a few years ago in Stockholm, with will.i.am one of the cofounders.  Diego Farias, also a cofounder and a former Warner Music Group executive, is the company’s CEO.

Jimmy Brodd, a third cofounder, hails from Stardoll and is now Amuse’s Director of Technology.  Andreas Ahlenius, another cofounder, is heading marketing at Amuse and hails from Universal Music Group.

So here’s how Amuse works — and why they’re offering free distribution.

The basic idea is that Amuse wants artist data, and is willing to incur the costs of distribution to get it.  For artists, that means free distribution to Spotify, Apple Music, YouTube Music, Deezer, Amazon Music, and a bunch of other services.

So what will Amuse do with that data?  Well, artists can view their own data for free.  But if the story starts getting exciting, Amuse will theoretically be in a great position to recognize the trend and strike a deal.  But the company says they prefer to ink licensing deals instead of heavy-handed, 360-degree contracts imposed by the majors.

“When the company identifies new talent, it signs artists through licensing deals rather than traditional contracts, which means the artists have access to large-scale promotion while still owning their work,” Amuse explained in an email.

That wouldn’t prevent an artist from signing with a major label, either on the recording or publishing sides (or both).  But Amuse probably wouldn’t have the rights to ink their licensing deals if the artist gets plucked by a major.  That’s one downside of their model, though the upside is that they seem pretty artist-friendly.  And they might even endeavor to do more traditional label and publishing deals down the road.

The funding itself came from Lakestar and Raine Ventures, and will be used to expand this concept worldwide.

At least $1 million of that is being earmarked for a giant advertising spend on Digital Music News — we wish.  But seriously, the company is probably going to become a lot more recognizable over the coming months.  In fact, Amuse could be viewed as a serious threat to traditional distributors, though switching away from a long-term distribution relationship is no easy feat.

Incidentally, Warner Music Group is also working on a free distribution concept called Level Music.  But upon closer inspection, the platform is anything but free (hint: read the fine print).

We were equally suspicious of Amuse’s free distribution offer, though a number of high-profile artists are giving it high marks.  That includes Imogen Heap, who tried the Amuse’s distribution out and said it’s totally legit — while giving it very high marks.

Amuse has also attracted participation from a number of big-label vets.

That includes Edgar Berger from Sony Music International and Jörg Mohaupt from Warner Music Group.  Christian Wilsson was even lured away from a plum design job at Spotify.  Now, that crew has a lot of cash to burn.

But they’ll definitely have some competition.  Already, we’re seeing some interesting distribution variants popping up, including one from ONErpm.

But more on that later…