Spotify Can Boost an Artist’s Royalties by $163,000 With One Playlist Add, Study Calculates 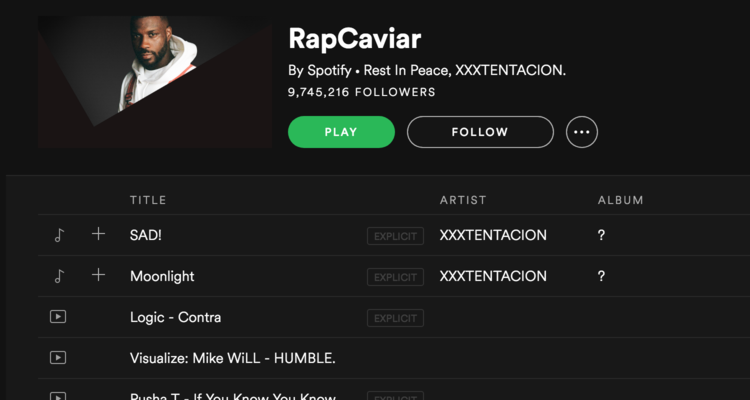 Spotify now has the power to make an artist famous — with one playlist add.  It also can dramatically boost an artist’s earnings with a simple drag n’ drop.

According to a study recently conducted by the University of Minnesota and the European Commission’s Joint Research Center, songs remain on Spotify’s top-ranked playlist, Today’s Top Hits, for an average of 74.4 days.  At the time of this article’s publishing, that playlist is just shy of 20.3 million followers.

With that many followers, an artist has a serious chance of catapulting a long-term, lucrative career.  In the short term, getting included in that single playlist may dramatically increase that artist’s revenues.

Furthermore, songs that are in the Today’s Top Hits playlist typically experience a play count increase of nearly 20 million.  This equates to a tentative royalty payout of between $80,000 and $163,000.

Our data shows that roughly 1 million streams on Spotify is equal to about $4,000, give or take.  The study calculates that payout as being more favorable, specifically between $6 to $8.40 per 1,000 streams.  But here’s a little caveat: those numbers were supplied by Spotify, according to the researchers.

Either way, the takeaway is simple: getting on a highly-followed Spotify playlists can completely change an artist’s career.  That dramatic change can happen in less than 24 hours, based on the decision of one playlist manager.

The study states that being added to the Today’s Top Hits playlist, “raises a song’s eventual streams by almost 20 million, which is almost a quarter of the average value of streams for songs that make that playlist.” In addition, “being ranked #1 on the U.S. New Music Friday list raises a song’s streams by about 14 million.”

The study also found that the rank at which the song is on the global playlist plays a great effect on the amount of streams.  But even lower-ranked tracks perform solidly, thanks to shuffling and big listener volumes. “The average global streams for a song at the 50th position on the Global Top 50 (and therefore ranked 50th the previous day) is 1,242,513,” states the study.

The aforementioned numbers go to show the true power of being added to an official Spotify playlist.

This kind of power raises a lot of questions — good and bad.

For decades, getting signed to a major label was considered a necessary first step towards achieving serious career success.  But getting added to a high-traffic Spotify playlist seems far more powerful.  In fact, given the choice between a supportive Spotify and a major label signing, the choice seems obvious.

And Spotify’s power is extreme.  Theoretically, Spotify could find an artist with 100 followers on their platform, add them to New Music Fridays, and launch them into international stardom.  With 20.3 million-plus followers, an artist would see a healthy hike in their royalty payments for the quarter and may potentially be contacted by booking agents, tour managers, venues, labels, and even music supervisors.

Obviously, the study concludes that a new artist being added to a top-tier playlist like New Music Friday stands a far greater chance of being discovered.  This is all theoretical, but with that many tens of millions of followers, there’s a pretty good chance that something big can occur.

“Growing concentration in the streaming market, as well as other markets dominated by one or a few players, may create a need for scrutiny of how platforms exercise their power,” the study concludes.

The types of songs that Spotify promotes are not what you think.

This is already changing the music industry as we know it.   In the table below, 19,055 songs were observed streaming in 2017 and are country-specific. The study states that “just under half (measured by either listings or distinct songs) are from independent record labels.”

Furthermore, U.S. origin songs count for roughly 68 percent of the 1,764 tracks in the global daily top 200 and 71 percent of streams. 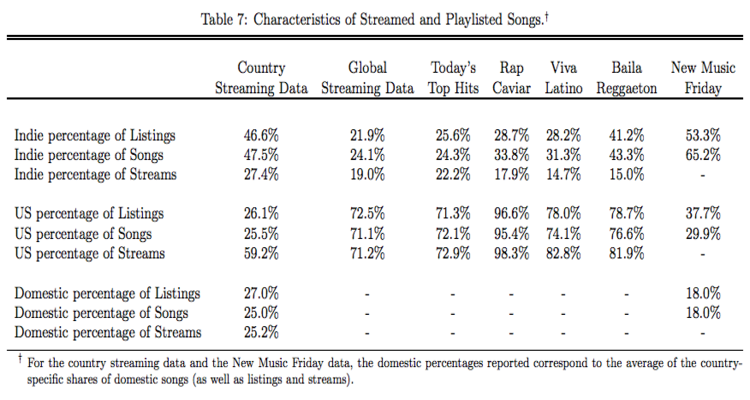 The music industry is most certainly streaming dependent.  Major labels have put their focus on streaming and less on physical product and digital downloads.  But as this digital revolution continues, concerns about placing so much power in the hands of someone behind a computer at a digital music provider like Spotify can be exciting and scary at the same time.

Can and will this get out of hand?  Does favoritism factor into these playlists?  What about streaming payola?  We can only hope this doesn’t happen, but aiming for an official Spotify placement isn’t a bad idea if you want your chances of international stardom to increase exponentially.

You can read the full study here.