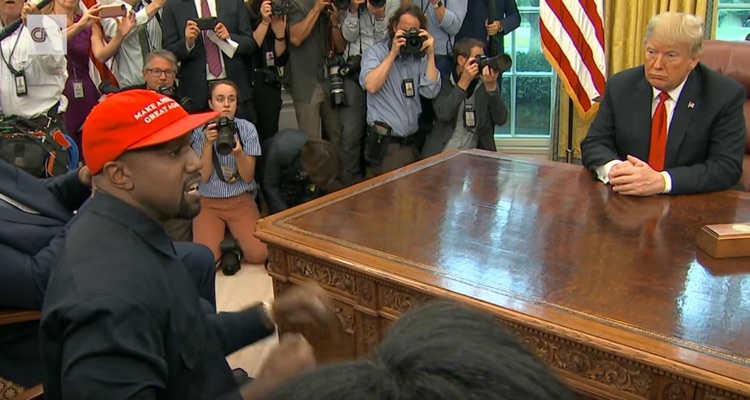 Kanye West meets with Donald Trump in October 2018, just prior to the signing of the Music Modernization Act into law.

Kanye West has launched a legal battle on two fronts against EMI Music Publishing and Universal Music Group in a spat over rights to his publishing catalog.  But EMI is now aggressively fighting back.

West shared on Twitter that he was attempting to buy his rights back from Sony/ATV Music Publishing.  Sony/ATV apparently valued the catalog at around $8 to $9 million.

However, the publisher refused to sell the rights to West, and that’s when the legal sparks flew.

West filed two separate lawsuits against Sony’s EMI and UMG for his publishing rights. The rapper is seeking declaratory relief and alleges unjust enrichment from his works by EMI, Roc-a-Fella, Def Jam, UMG, and Bravado.

In the complaint, the producer/rapper evoked slave imagery,

Now, EMI Music Publishing has launched its own lawsuit against West in federal court for breach of contract.

The new lawsuit argues that West’s claims are blocked by copyright law and deny that West provided any personal services.

West’s contract was signed before he gained such widespread mainstream attention and prevents him from retiring during its term.  The clause is designed to prevent West (and other artists) from abandoning music creation.

“At no time during the Term will you seek to retire as a songwriter, recording artist or producer or take any extended hiatus during which you are not actively pursuing Your musical career in the same basic manner as You have pursued such career to date.”

EMI further points to a clause providing exclusive jurisdiction in New York, rather than California. West argues that he’s been laboring for EMI since the contract was signed in 2003.  He also noted that the contract had been renewed several times afterward.

Just last year, a New York appeals court upheld a rejection of the same claim from Kesha, who attempted to cancel her contract with Dr. Luke.

Federal law allows copyright reversion, but the option doesn’t become available until 35 years after the work is first published. West is hoping to force EMI into that reversion much sooner.